Who is Selected to a Jury?

Under California law, defendants in a criminal case have the legal right to hear their case in a jury trial. Juries are usually a group of twelve regular public people and several alternates responsible for being fact finders in criminal cases.

Then, they are required to make a group decision on whether the defendant is guilty or not guilty of the crimes they are charged with. Jury trials are a critical part of the criminal case process and afforded to defendants charged with a misdemeanor or felony crimes.

After consultation with their criminal defense lawyer, many defendants decide to waive their right to a jury trial in favor of a bench trial, which means only the judge will hear and determine the case. A bench trial is often preferred but will always depend on the nature of the criminal charges and the facts of the case. However, most defendants will decide to be heard in a jury trial if the issue is not resolved.

Readers should note that most criminal cases never reach the trial stage as they are settled through negotiations and a plea bargain with the prosecutor. Our Los Angeles criminal defense lawyers are providing a review below for more information.

There are many essential features of a jury trial that are designed to safeguard the rights of a defendant charged in a criminal case. First, the jury members must represent an accurate reflection of the local community. 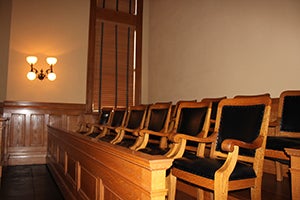 However, while the members on a jury won't ever be precisely proportionate to the community's demographics related to race, ethnicity, gender, sexual orientation, national origin, etc., there can't be any intentional attempts to make a criminal jury unrepresentative.

The most common example of this is striking jurors of a certain race or gender because there is an assumption that a juror of a different race or gender is more likely to be favorable to one party.

A jury representing the defendant can ensure the accused is afforded a fair jury of their peers that is guaranteed by the United States constitution.

What are the Steps of a California Criminal Jury Trial?

The typical California jury trial starts by selecting a jury. Once the trial begins, the opening statements give jurors an overview of what is expected to be proven.

Most opening statements are relatively brief but can get quite detailed. The prosecutor is the first to give their opening remarks, followed by the defendant's criminal defense lawyer. Here is a brief review of the following steps:

A sentencing hearing will be scheduled if the defendant is convicted of any charges in a California criminal court. This hearing is an opportunity for both the prosecutor and criminal defense lawyer to present arguments to the judge related to the actual sentence for their crime.

The criminal defense attorney presents mitigating factors on behalf of the defendant, while the prosecutor will present aggravating factors. After the judge hears the arguments, they are responsible for deciding a specific sentence that is legally permitted.

Jury Selection Takes Longer Due to the Coronavirus

I just recently finished a jury trial in one of the California courthouses. The test took a little longer than usual because picking the jurors was a more time-consuming process. In this particular courtroom, only 18 jurors could fit in the courtroom at a time, where you can usually do anywhere from 50 to 70 jurors in a specific courtroom.

But because of the Coronavirus and spacing out considerations, the judge had to bring in the jurors 18 at a time, and they were basically brought in every hour or so in panels of 18, and we went through each of the panels.

We had approximately five to six panels. We were permitted to ask questions of each of the prospective jurors, called “voir dire,” and helped us use our pre-emptory challenges, any challenges for cause.  Ultimately:

So, that was undoubtedly one impact of the Coronavirus. Also, when asking questions, the attorneys had to wear masks. Fortunately, in the closing argument, the judge allowed us to take our covers off because it's tough to talk for an extended period with a mask on, especially when you're arguing with a jury.

The testimony was pretty similar to what happens in normal jury trials across California, except that the witness was given the option to take the mask off while they testified. I made the argument that the jury should be able to see the witness' face see their expressions when they're asked questions by both the prosecution and defense.

So, the judge said the best that he would do was say that they could take the mask off, and the main witnesses ended up doing that. So, that was very helpful to the defense because he was caught in several lies.

The Most Significant Change is “Time”

So, I would say, for the most part, the most significant change in jury trials in Los Angeles and across the state of California is time:

But beyond that, everything is pretty much the same as far as substance goes. I also noticed that jurors who showed up for jury duty were more serious, not complaining and trying to get out of jury duty as usually happens.

I think the jurors that typically do that simply didn't show up and felt they would be safe because of the pandemic and not getting issued a subpoena to show up in court. The jury trial process is the primary protection of a criminal defendant's right to liberty.  No, the system is not perfect in California, but it still means the government has the burden of proof.

Our experienced team of criminal defense attorneys has litigated hundreds of cases through jury trials with excellent results for our clients.

So, if you or a loved one has a jury trial in Los Angeles, the San Fernando Valley, Santa Barbara, Riverside, Orange County, San Bernardino County, I've been to all of those places.  I've been battling for my clients for nearly 30 years. You've come to the right place.  Take the first step.  Pick up the phone.  Ask for a meeting with trial attorney Ron Hedding.