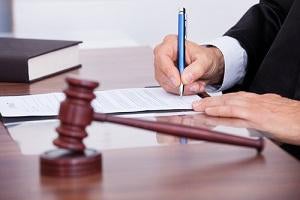 Often, when there's a conviction in these cases, the stay-away protective order lasts for the three-year or five-year probationary period. So, these protective orders are the first things that need to be dealt with in domestic violence cases in the Van Nuys court. Often, we can get the wife to come in and tell the prosecutor, I don't want to have a full protective order. This guy is living with me. We've been together for a long time. We have kids in common. He has a job. He pays the bills. He supports me.

So, we're able to get that taken care of where it's a level one protective order in a domestic violence case, and that allows the parties to be together while the case is pending. But if the wife doesn't show up and doesn't say anything, then this is the strange thing about these domestic violence cases – the protective order is automatically issued.

If you violate one of those protective orders and the police catch you, you'll be prosecuted again. They'll charge you with a new case. They might up your bail. There're all sorts of things that can happen. So, the first thing to deal with is the protective order.

The next thing to deal with is the bail. Most times in these domestic violence cases, they're setting the bail at $50,000.00, and that's a felony bail, but a lot of times when you get to court, it's filed as a misdemeanor. It's still a serious situation, but a $50,000.00 bail is not a misdemeanor bail. It's a felony bail.

The next thing to deal with is how you will maneuver the case to the Van Nuys court system. These domestic violence cases have to be maneuvered the right way. You want to get in front of a prosecutor or judge who you know the tendencies of and who will be fair when it comes to these spousal abuse or domestic violence cases.

The only way to gauge that is because you probably haven't been down this road before. You don't know the Van Nuys court system and how they deal with domestic violence cases is your attorney.

This is why I get you in the office. We sit down from the beginning. We decide what our strategy is going to be. Are we going to fight the case all the way? Are we going to try to do damage control and resolve the case? These are questions that have to be answered right from the beginning. We have to sit down and look at all the paperwork in the case, any videos, pictures of injuries, and then use our common sense and decide the best way to handle this domestic violence case.

So, make the phone call. Set up the appointment. We'll sit down and go over your case. When you leave my office, you'll leave with a sense of calm and a sense of control back because you're now going to know what you're facing, what you can do to help in the domestic violence case, and what I'm going to do as your criminal defense attorney to get you the best possible result.