Reviewing the Type of Police Pursuit

The District Attorney's office in the Van Nuys court has a policy that you go to prison if you're convicted of an evading arrest case. They hate when they see those helicopter chases on the freeway – all the danger that ensues when the police pursue people. The media picks it up.

So, what my job is is if they've got the goods on the client as far as an evading case goes, I have to show them that it's not one of the typical evading cases where the client deserves to go to prison.

In other words, the shorter the pursuit, the better when it comes to these evading cases. If we can show that it's a very short pursuit and only lasted a mile, there was no dangerous driving, no high speeds, no accident, not a bunch of blowing red lights. 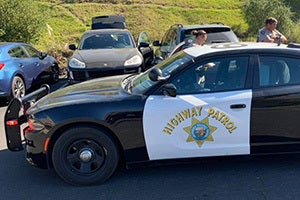 If it's late at night and there's nobody out on the streets, obviously that would be a better argument than if there's a bunch of traffic and the person's weaving in and out of traffic at high speeds being chased by the police. You'll see now these evading cases have just taken on a life of their own. The police are breaking off many pursuits because what's happening in the pursuits is going on, and somehow someone is being hurt.

Either the person driving the car is killing somebody, the police are becoming involved in an accident, and someone is passing away or getting seriously injured. Then there's a huge lawsuit, and the county has to defend it and pay out thousands and thousands of dollars.

So, these evading cases are serious political business in San Fernando because there are many people here – 17 million-plus. A huge metropolis. So, if you get one of these cases in the Van Nuys court, expect the prosecutors to come down hard on you, and that's where you need a great defense attorney who can mitigate and show that your case is an aberration. It's not going to happen again, and it's not what the prosecutors are used to prosecuting, and therefore, the defendant shouldn't' be looking at many years in prison.

So, what I have you do on an evading case in Van Nuys Courthouse is you come in and talk to me. We're going to figure out who the prosecutor and judge are in charge of your case, what their tendencies are, what are the things that can make them consider a different sentence than prison?

How can we get you probation? Can we get character letters – letters from your job, people who know you? What other things can we bear that show that this is one of those cases that should be outside the typical prison sentence to an evading case?

Another thing I've seen is I've had people who were charged with evading cases, and they missed them. Either they got away on foot, or they got away in a vehicle. Now the police have the job of proving that it was the person driving the car who is responsible for the evading case in Van Nuys, and the way they prove that is they are going to need somebody to identify the person.

Either identify them while they were driving, which is more difficult because you get a minimal look at the person because you only see their head while their driving, depending on how dark it was, whether they had tinted windows, etc., that's going to be a big determiner there. Another way they can try to identify them is by placing them if they go on foot and they're able to see them outside their car, and the police come in and testify that that's the guy. They're able to pick him out of a line-up, pick him out of a photo line-up, and then they can try to make their case for the evading.

Of course, other circumstantial evidence that a person is the one driving the car is if the car is their car – if it's registered to them. If it's a single male and they have some general description that matches the person, there are all kinds of different ways to identify someone in an evading case and determine whether you could file your case in front of a jury. We're going to need to see all the evidence the prosecutors have.

I sit down with the client. We talk about it, and we make an informed common-sense decision whether this is a case we can win or not. So, what I have you do – whether we're going to resolve the issue by way of a negotiated plea or a trial – I have you come into the office.

We sit down and talk about it. We put all the facts on the table. We start to make some strategic decisions on precisely what we're going to do moving forward – whether we're going to fight this evading case and let a jury decide the case, or whether it's something I need to go to the prosecutor and judge, get a mitigation package together and show them what you're all about.

Give them your version of events. Explain to them what happened so we can get this case resolved, protect your rights, your freedom, your reputation, and gets you out of the criminal justice system as fast as possible. Contact the Hedding Law Firm for help.