Over the last 26 years, I've handled hundreds of vehicular manslaughter related offenses, especially in the San Fernando Valley, where my office is based in Encino.  There are so many people jammed in the Valley, just like Los Angeles, that there are many accidents that occur. California Penal Code 192(c) defines the crime of vehicular manslaughter.

Other cases you see springing out are where somebody is intoxicated (CALCRIM 591).  Either they have alcohol or drugs or prescription medication — they do something on the road that's dangerous, and they end up killing another person.

So, these are really where I see vehicular manslaughter cases springing out in Los Angeles, and they're severe cases because you have died, and now they're looking for somebody to blame. 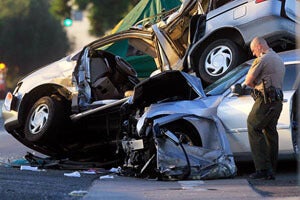 You're looking at a loss of your driving privileges potentially.  So, these are severe charges.  Not to mention the back-end of it, where if you get a conviction for vehicular manslaughter, now you're probably going to be sued civilly by the party, and they're going to try to claim that you killed their loved one.

Some of the family might get involved and sue you civilly, and you're also going to be looking at restitution in the case. In other words, if you're held responsible for the death in a vehicular manslaughter case, you're going to have to pay for any money anybody lost based on your particular actions. For example, funeral costs which could be pretty expensive — could be your responsibility if you're held responsible for an accident where somebody ended up passing away.

These cases are sometimes very tricky because sometimes you can't tell who caused the accident.  In that case, the defense might argue that someone else caused the person to die, or maybe they caused themselves to die. Sometimes people are driving crazy, and they end up crashing into somebody else that might be intoxicated, for example. The drunk person didn't have anything to do with the accident, except the other party hit them.

However, there is a presumption in the law regarding these vehicular manslaughter cases that if you were intoxicated and you get in an accident, it's presumed that you're the one responsible for the accident.

So, many times, I find myself arguing in these cases that my client is not responsible.  Somebody else is reliable, and I have to try to rebut that presumption to prove that my client didn't cause the accident — that either someone else caused the person's death or the person caused the death.

Then you get into the argument of whether there are two different causes of death.  Then the issue becomes which one of those causes was a substantial factor in the death.

In every single cause — and there could be one, two, three, four, five causes of an accident, but every case determined to be a substantial factor, either by a judge or by a jury, is going to be responsible for that accident criminally.  So, you get a little taste there of how complicated some of these vehicular manslaughter cases can be.

So, you're going to need someone like me who's been doing this 26 years, who's battled these vehicular manslaughter cases and knows how to defend them, knows how to negotiate them. If they've got a case against you — you've done something wrong — you're going to want to have your defense attorney there to do damage control, to mitigate the circumstances, and to get you out of the criminal justice system as fast as possible.