Criminal Defense Attorney in the City of Burbank, CA

A Lawyer with Decades of Experience

Burbank is its own little city, and I've been practicing criminal defense here for a long time since the early 1990s.  I worked for a Superior Court judge quite some time ago and his research attorney, so I got a good perspective on how Burbank deals with criminal matters.

I also know how judges, in particular, resolve cases because I was part of that process of figuring out how to deal with a case, huddling up with the judge, and seeing how a judge figures out what to do in a particular set of circumstances.  I also worked for the District Attorney's office in Los Angeles County, so I have that angle.

I know a lot about Burbank and criminal defense, having been involved with defending people in the Burbank courthouse for the last 25 years, But what I think you should know about it is Burbank is its city, and even though it's part of Los Angeles County and the District Attorney staffs that court, they still have their way of doing things.

The police are very conservative.  Many people complain about the police bothering them and being over-zealous. I think that's important to know when you go into the Burbank court because if you have a case where somebody's been wrongfully arrested or wrongfully accused in Burbank, it makes a lot more sense because of the way the police handle things. 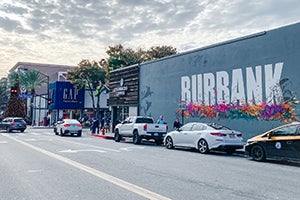 Now, of course, there are a lot of cases where the police have done what they're supposed to, and the person did commit the crime, and they've got the evidence.  I think that's one of the first things I do.

Is this an excellent criminal case?  Or is it not a good criminal case?  Is this something we're going to fight, or are we going to negotiate?  Then, when we go into the Burbank courthouse, we will be dealing with either the City Attorney's office if it's a misdemeanor or the District Attorney's office if it's a felony, so you have to know what agency is dealing with the case.

Then you have to figure out which judge is in charge of the case, and then we look at how we're going to handle the case.

What's fascinating about the city of Burbank as it relates to criminal cases is that if the claim is filed as a felony, you're going to go in division one in Burbank.  That's where they handle all the felony cases.  It's a pretty small courthouse.

There are only three criminal courts in there.  If you do your preliminary hearing on a felony case in Burbank and the person is held to answer, meaning that the judge finds there's enough evidence to move forward to a trial, they don't keep the case in Burbank. There's not enough room there.  So, what they'll do is send that case to Pasadena.  Glendale has the same thing going on.  They do felony cases in Glendale, typically.

So, Burbank city is a small city.  The courthouse has been there for many, many years. Even though they've closed at least ten of the courthouses in LA County, they're keeping Burbank Court Burbank serves a pretty big population. A decent amount of crime goes on there, and the police are out in force trying to protect what I would consider an older community there — a more conservative community — and a community that believes in law and order.

That's the perspective that I get having done this for quite some time and handled hundreds of cases in the Burbank Superior court. So, if you've got a case, you were arrested in the city of Burbank, and you need help from a criminal defense attorney, give us a call.  Let's talk about it.  I can give you my perspective on what you're looking at.

I can also tell you what you're facing, whether or not it's a case that you should fight, whether it's a case that we should resolve, and then some of the strategies we can move when we're talking about that city and how they deal with criminal cases.