I have been defending weapons cases for 25 years and have seen many good citizens unfairly or too harshly prosecuted related to a weapons charge in Los Angeles. One of the keys to turning the tide in your favor is to have your attorney show your side of the story and make it clear to the prosecutor and judge that you are not a dangerous person.

Because weapons have become so politically charged, prosecutors and judges are always concerned that someone who has a gun is either a gang member or positioning themselves to commit a more serious crime. However, if you have an experienced weapons charge defense lawyer by your side, you will not have to worry about what the judge and prosecutor think about your case. Experienced defense attorney knows exactly how to protect their clients.

Suppose we can show the prosecutor and judge that you are not a dangerous person and you either made a mistake or have a legitimate reason for possessing a gun. In that case, we put you in a position to resolve your matter with the most favorable outcome. Our gun crime attorney has helped numerous individuals facing such charges. People with jobs, families, and accomplishments in their life do not deserve some of the harsh consequences that come with a gun case.

It is a crucial first step that you find a local attorney that knows how to fight the right way for their client's reputation, rights, and freedom when so many important things are on the line. You can call our office and talk with our weapons charge defense lawyer in Los Angeles County.

Because weapons charges are politically charged offenses, you need a criminal defense law firm familiar with the system in which your case is filed. We are well known and respected in Van Nuys Court, San Fernando Court, Sylmar Court, and all Courts in Los Angeles County. I urge you to call our firm at (213) 542-0940 and set up a free face-to-face consultation. We will assist you in designing a plan to protect your rights and freedom.

What are Some Defense Strategies?

Believe it or not, one of the best attacks I use on the prosecutor's case is to know the law better than they do. Many of the weapon cases I have handled over the past twenty-five years have been dealt with to my client's advantage because the police either did not understand the law related to my client's situation or had made a mistake related to the type of weapon my client possessed.

Law enforcement has made a massive case out of an overblown situation, and once I show the prosecutor what is going on, I can resolve the matter fairly. As a weapons charge defense lawyer, I am now very experienced in handling such cases.

As long as the possession of the gun is not to commit a robbery or some gang activity, we always have a chance to mitigate the situation and come up with a resolution that considers my client's rights. The police and prosecutor are mainly concerned about weapons being used against them or some poor innocent person.

This is where we have to show them that you were not involved in the type of usual behavior the harshest gun laws were meant to deal with. Character letters, a good job, and letters from family and friends always breath a positive life into the situation. The judge and prosecutors can then see they are dealing with a good person who they should give a break and a chance to show they will not become involved in a situation like this again.

We will work as a team to paint a picture for the judge and prosecutor that sees you in the best possible light. When you hire our defense attorneys, you will know that you are in the right hands.

What Are Some Laws Related to Gun Use and Possession?

A weapon offense is a criminal act involving the illegal possession, use, or sale of a weapon(s). In California, the following weapons may be considered illegal: firearms (guns), knives, brass knuckles, pepper spray, switchblades, and explosive devices. Firearms are the most lethal and subject to stricter legislation of all the weapons mentioned.

When it comes to gun control and firearms legislation, California has some of the most stringent laws, which are outlined below:

I've been doing criminal defense now for over 26 years.  I've been practicing in Los Angeles County, and I have an office in Encino very close to the Van Nuys court and San Fernando court, and I'm pretty familiar with how gun and weapon cases are handled.

They're handled very seriously because there are a lot of shootings in Los Angeles and gun violence is definitely on the agenda of the prosecutors and judges as far as a political issue to deal with.

I'm seeing them charging felonies for just simple possession of guns out on the street.  I don't understand what's triggering it other than the fact that they want guns off the road. Too many people are getting shot by either gang members or people going into crowded locations, shooting people across the country.  So, Los Angeles is where you do not want to be holding a gun.

It's a dangerous thing, especially if you're a gang member.  They'll charge a felony against you, and a lot of times, they'll be seeking state prison, and they'll add a gang allegation saying you're holding the gun for the gang.

I've also seen them in simple cases filing felonies where they would typically file misdemeanors, even guns, just in a vehicle.  It's tough in Los Angeles county to even get a gun permit, so people who have guns and drive around will be punished exceptionally severely.

Some of the defenses are, that if you're carrying the gun unloaded and have the bullets in a separate compartment; you can often avoid getting a conviction for that.  Sometimes you forget that you have the gun with you.  That's usually not a very good defense. 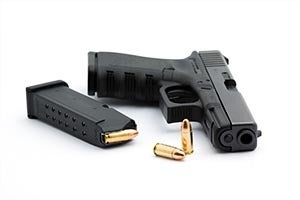 You've got constructive possession.  It's in the car.  You should have gotten rid of it.  They're usually going to fight you tooth and nail in a situation where you're trying to claim that you forgot about it.

So, the answer to how weapon cases are charged is earnest, and if you have any mistake about it, anyone that commits a crime with a gun is looking at a ten-year enhancement for that gun under California Penal Code 12022.53.

For example, if you go in and rob a liquor store with a gun, they're going to get you for the robbery, which usually has a high term of six years, plus they're going to get you for the ten-year gun enhancement. So, in that scenario, you're looking at a 16-year sentence at 85%, and you end up with a strike on your record.  So, that gives you a feel for how serious these guys are looking at guns and people who own, use and possess firearms.

Of course, if you've got the gun for a lawful reason — maybe you're coming from the shooting range — you do have rights as a citizen.  You've got Fourth Amendment rights against unreasonable searches and seizures, and as long as you've got the gun stored adequately. You're transporting it the right way; you have a good argument that you're lawfully carrying the weapon.

So, you're going to want to get an attorney who has handled gun-related offenses; number one, who knows the defenses to it; and number two, who can mitigate things and kind of show the other side of things, so you don't end up with some horrible sentence related to the possession of the gun.

Suppose you have been charged with a weapons offense such as the illegal sale of a weapon, unlawful possession of a firearm, possession of a concealed weapon, assault with a deadly weapon, or a violent crime involving the use of a gun. In that case, you need to speak with a qualified criminal defense attorney.

If you are convicted of weapon charges, you may have to spend time in jail, pay fines, or be on probation. Additionally, you may lose your right to own a weapon. Hiring a knowledgeable attorney will ensure that you receive the best legal representation possible.

The Hedding Law Firm has helped numerous clients who have been charged with weapon offenses. We are skilled criminal defense attorneys committed to protecting our clients' best interests. If you face weapon charges and want leading legal counsel, call us for a free case review.