In the early 1980s, the war on drugs impacted how a drug case would be prosecuted for decades to come. In both the state and federal court systems, offenders have doled out many years in prison for their connection to drug crimes. There has been a softening in Los Angeles County today as far as drug-related crimes are concerned.

Many law enforcement offenses are angry and frustrated with the system and are not arrested as many people for drug-related crimes. And, judges and prosecutors do not seem to bend on getting people involved with drugs. It is still serious business if you are charged with a drug-related offense.

Courts are Tough on Drug Crimes

I've been defending people charged with a drug crime in Los Angeles courthouses for the past 27 years. I have a lot of experience in how vice and the various narcotic detectives deal with these narcotic cases.

Some of these narcotic cases are simple sales cases, while others are more sophisticated, involving large amounts of drugs, weapons, and all sorts of different issues related to drugs. They've been very tough on crime in Los Angeles for many years, specifically drug-related offenses.  San Fernando court, for example, is very well-known for putting people in prison, especially people who are involved in:

What they will do on the first offense, you would probably get probation as long as it wasn't a large number of drugs. But on the second offense, they would use the first offense as a three-year prior, plus they'd be talking about another two or three years for the new offense so that you would be looking at five or six years.  And that was for most of my career. 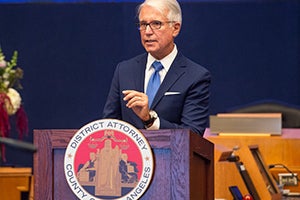 They have slid off that path over the last five to ten years, and they've been much more reasonable, even though you're still looking at the prison for a second offense.

The new head prosecutor of Los Angeles County has indicated that he will not be seeking any enhancements in recent times.

This includes a three-year prior enhancement for drugs against those individuals charged with drug-related offenses in the San Fernando Valley and Los Angeles County. Not only that, there have been several propositions passed.

Many of these crimes where people were looking at years in prison have not shrunk down to probation, and even in some cases, there is no jail if it's handled the right way.

However, if you have an excellent local attorney, in my opinion, you have a fighting chance to avoid the harsh penalties that have been doled within the past years. You mainly need an experienced drug crime attorney at the Hedding Law Firm by your side to defend your case.

If you or a loved one has been charged with a drug offense in Los Angeles, Van Nuys, San Fernando, Sylmar, Burbank, and Glendale, you owe to yourself to call our firm and set up a free face-to-face consultation with one of our top attorneys. We specialize in Van Nuys drug crime cases. You will be educated on how the system works in the particular courthouse your case is in, and in many cases, we can design a plan to prevent a conviction from going on your record! Our drug crime lawyers will be by your side every step of the way.

So, if you or a loved one is charged with a drug offense in Los Angeles, you've in the right place. I've seen the evolution from many years ago to the present. You have a chance:

The new head DA sees the benefit in trying to educate people and trying to help people who are charged with some of these severe drug offenses. Instead of warehousing them in a prison or a jail, trying to help them, work with them and treat them.  Many of these people are selling drugs and are also using drugs themselves.

When it comes to charges involving possession of narcotics (marijuana, cocaine, methamphetamine, PCP, heroin, ecstasy, etc.), there is a good chance we can assist you in avoiding a conviction on your criminal record. Our first plan of attack depends on the factual scenario of each case. There are often issues with the police officers' probable cause to search your car, home, or person. Under the Fourth Amendment of the United States Constitution, each citizen is protected against illegal search and seizure.

The police need consent, difficult circumstances, probable cause, or a warrant to search someone's home, car, or person. If there are any discrepancies in the police reports, we pounce on them and point them out in the form of a 1538.5 motion to suppress evidence or other applicable movement. If this motion is granted, drug evidence is inadmissible and cannot be used against the defendant.

A drug conviction can ruin a person's record and a chance for future employment. It can also destroy a person's reputation and ability to attain a higher position in their current career. If you are charged with a drug charge, you should contact us immediately and set up an appointment with our drug crime defense lawyers. County. This decision could help prevent a life-altering consequence.

Proposition 36 and, more recently, Proposition 47 have been passed by California voters to bring some relief to people who have made mistakes with drugs and alcohol. More than ever, the State realizes we are not punishing all low-life junkies or drunks that deserve what they get.

We were being very harsh on these people, these people who are our friends, brothers, sisters, moms, dads, cousins, and neighbors. Our law firm treats our clients like we would our friends and family; we look out for each individual, putting in every effort to get the drugs and criminal court system out of their lives.

Our goal is to get our clients back home where they want to be, back working, succeeding, and most importantly, back with their families. If I cannot do that, my experience as a drug crime lawyer in the San Fernando Valley will be no use. Drug charges such as trafficking, cultivating, distributing, and manufacturing are more severe and prosecuted vigorously. That is why our attorneys step up to the plate and do everything we can to help.

If you have been charged with possession for sales, drug conspiracy, or prescription drug fraud, the consequences and stakes are much higher than a simple possession case. You could be facing prison time, and you must contact a reputable law firm to protect your freedom, reputation, and rights immediately. We have handled thousands of narcotics cases and can be a valuable advocate on your side.

Can I Get Rehabilitation Instead Of Jail Time?

If you get charged with a felony drug offense in the Los Angeles, San Fernando Valley, or surrounding counties, you have a severe case. As a result of recent changes in California drug laws, most possession cases that were previously considered felonies are now misdemeanors.

If you are facing a felony drug case in one of the LA County courts, I'd suggest you pick up the phone and call me. We can sit down and figure out what happened, what ramifications you face, and how we can put you in the best possible position in moving forward with your criminal matter.

If convicted of a drug crime, they may be sentenced to jail time, fines, court, legal fees, court-ordered treatment programs, community service, and probation. The length and severity of the person's sentence will depend upon the type of drug the person possessed, the amount of the drug, and whether there was drug trafficking.

The sentence will also depend upon if the person has been convicted of prior drug crimes and if the person has a previous criminal record. Additionally, the court will consider if the person solicited a minor or used a little during the commission of the drug crime or if they are a gang member. We also handle juveniles arrested for drug offenses. You may be eligible for the Diversion program, an alternative to a jail sentence. Discuss your case with our San Fernando Valley drug crime attorney to understand the different possibilities and outcomes it can have.

Requirements for a Diversion Program

If you have been charged with a drug crime in LA County, you need to immediately consult with a reputable drug crime attorney. A lawyer will have the forensic knowledge, investigative resources, and legal training it takes to fight your drug offense charges successfully.

Because your drug charges will be coupled with a DUI offense, you will be going through the same criminal process that all other DUI arrests go through. This includes suspending your driver's license (through the DMV) and a separate criminal case prosecuting you for Driving Under the Influence.

You want to meet with your attorney as much as necessary to feel confident that you have given them all the information and details related to the case. You should also feel sure that your attorney has answered all your questions about the case, that you understand what you are being charged with, the potential defenses you have, and the penalties you face.

If you have been charged with DUI while under the influence of drugs, call us today to discuss the details of your arrest and schedule a DMV hearing to help save your driver's license. Remember, you only have ten days from the point of your arrest to protest these charges and protect your driving privileges. Our attorneys understand people's adverse consequences when convicted of a drug crime. That is why we do everything we can to fight for our clients.

So, the tables have now turned.  The stage is currently set to do many things with these drug cases. In my opinion, though, you need someone who knows drug defense in Los Angeles, the prosecutors, the judges, and the police.

Many of these cases can also be trimmed down with a powerful motion that knocks out some of the prosecutor's firepower. Because many times, especially in these significant drug cases, the police are cutting corners and doing things the wrong way. Therefore, we can get motions granted — whether it be an illegal search.

Sometimes they'll get a search warrant, but the search warrant will not be adequately obtained.  Now, they can't search anybody's cell phone unless they get a contract to search a cell phone.

They can't just grab it off of somebody and start searching through it unless the person is stupid enough to give their consent. So, all sorts of things can be done if you or a loved one is charged with a drug-related offense, possession for sales, or sales, in Los Angeles, pick up the phone.

Make the call now.  Many things can help you if you know how to defend these cases the right way. Ask for Ron Hedding.  Take the first step towards helping you with your problem, getting you out of the criminal court as fast as possible.