The prosecutors don't want individuals who commit domestic violence-related offenses threatening to do something terrible to a potential witness in a case because that pretty much strikes at the fabric of the judicial system.  So, they will punish somebody attempting to threaten, dissuade or intimidate a witness from testifying in a criminal case.

I've had cases in criminal court where people are arrested and charged during a preliminary hearing, for example, in criminal court. They say something to a witness waiting out there to testify, and another individual in the hallway or a detective will hear that. Then that person will be arrested on the spot for saying something, and a new charge will be added to their complaint.

Often, when victims or witnesses come to court, the detectives go with them and sit with them to prevent witness intimidation by defendants or any of their family members.  Sometimes family members will do stupid things in court that intimidate witnesses and then want to testify. So, the prosecutors start losing witnesses in criminal cases.  This makes them very angry, and they're going to be looking to punish somebody who intimidates or threatens a witness in any way. 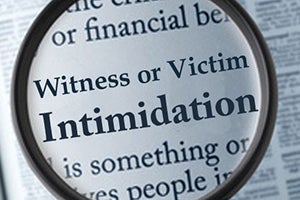 And as these charges mount up against somebody, you can guess the prosecutors use this to get long jail sentences against the person and put many harmful restrictions against that person related to their criminal case.

So, if you've got a witness intimidation case, maybe it shouldn't be filed against you.  Perhaps it's an overblown charge, and something can be done to mitigate it down to something less.

If you think about it, an employer will not want somebody to be intimidating and threatening witnesses.  They're going to see that intimidating witness charge on your record, and they're going not to want to hire you. They're probably going to figure that if they get you in a work environment, you will have some issue with either a customer, other workers, or even higher-up management.

Negotiating to Get Charges Reduced or Dismissed

So, you don't want this on your record and the way to have any chance of it not being on your record — either getting it dismissed or getting it lessened down to something else — is to get an attorney on your side who can tell your side of the story and show the good things about you — whether it be through character letters or other witnesses who might know the circumstances surrounding your arrest related to the upcoming criminal case.

So, what I have you do is you come in.  We talk about it.  The attorney/client privilege protects anything that's said between us.  Even if you don't decide to hire me in the case, I obviously can't and won't tell anybody about the discussion. But once I get a good understanding of what's going on and a good feel for the case and what happened, that puts me in a solid position to advocate for you so you could end up with the best possible result in your case.