Brandishing a Weapon or Firearm

Brandishing a weapon or firearm is described under California Penal Code Section 417, which makes it a crime to publicly exhibit or draw a deadly weapon in somebody's presence in a threatening manner – if not in a situation of self-defense. It should be noted that if you use a deadly weapon unlawfully during a quarrel, it's also considered a brandishing weapon offense.

A deadly weapon includes any item inherently dangerous that is used in a manner capable of causing great bodily injury (GBI) or death. Typical items include a firearm, baseball bat, broken bottle, rock, knife, etc.  A “great bodily injury” is described as a significant injury – something more than a minor injury.

Penal Code 417 brandishing a weapon can be filed as a misdemeanor, wobbler, or felony crime. A “wobbler” means the prosecutor has the discretion to file the charges as either a misdemeanor or felony – generally based on the details of the case and your criminal record. A PC 417 conviction could result in severe penalties, which is why you need to consult with an experienced Los Angeles criminal defense lawyer if you were accused of brandishing a weapon.

At the Hedding Law Firm, we have a record of success defending clients against any violent crime case and will guide you through the legal process. To give our readers a better understanding of Penal Code 417 brandishing weapon charges and defenses, our California criminal defense lawyers provide an overview below.

Definition of PC 417 Brandishing a Weapon or Firearm 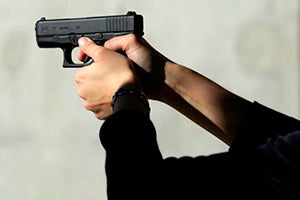 It should be noted that brandishing a weapon in the “presence of another person” means someone was present when you exhibited a deadly weapon. A rude, angry, or threatening manner is self-explanatory. You don't have actual intent on harming someone to be convicted.

As stated above, deadly weapons are defined as any object or instrument inherently fatal or dangerous or are capable of being used in a manner that could cause severe injury or death. The obvious items are guns, knives, and shotguns – but also include much less obvious things like rocks, bricks, pipes, and a wide range of other items.

To be convicted of brandishing a weapon or firearm in violation of California Penal Code 417, the prosecutor must prove – beyond any reasonable doubt – the elements of the crime listed under CALCRIM 983 Jury Instructions:

If convicted of a misdemeanor case of Penal Code 417 brandishing a weapon, you will be facing the following penalties:

If convicted of brandishing a firearm at an open child daycare center – the case is a “wobbler” that can be charged with either a misdemeanor or felony crime. A misdemeanor conviction carries three months to one year in county jail. A felony conviction carries up to 3 years in a California state prison. In a situation where you brandished a firearm in the presence of a law enforcement officer performing their duties, penalties include up to nine months for a misdemeanor and up to three years in state prison for a felony.

There are a variety of strategies our criminal defense lawyers can use to defend you against brandishing weapon charges. Each case has its unique facts and must be closely examined to determine a plan.

Suppose you consult with our law firm in the early stages of your case – such as while under investigation or immediately after arrest – it can make a massive difference in the outcome. Early intervention can often avoid the formal filing of criminal charges or a DA rejecting your case. We might uncover favorable evidence leading us to conclude criminal charges could not be proven. We know to navigate the criminal justice system in Los Angeles. If pre-filing representation is not an option in your case, common defenses against charges of PC 417 brandishing a weapon include:

Remember legal definition above states “except in self-defense.” We might be able to argue you were lawfully defending yourself from another person. California's self-defense laws state you are allowed to use self-defense as long as you had a reasonable belief you or someone else was in imminent harm, and no more force than necessary was used to defend yourself against the damage.

The display of weapons was not threatening.

Again, the legal definition above states the prosecutor has to prove you “drew or exhibited the weapon in a rude, angry, or threatening manner.” We might be able to make a reasonable argument your display of the deadly weapon wasn't threatening, or your conduct was just misunderstood.

If you are facing allegations of brandishing a weapon or firearm that violated California Penal Code 417, contact our criminal defense law firm in Los Angeles. We will examine all the details and provide you with legal advice. Early intervention can be critical to the outcome of your case. Hedding Law Firm serves clients throughout Southern California, including the greater Los Angeles area and the San Fernando Valley. We are located at 16000 Ventura Blvd #1208 Encino, CA 91436. Contact our law firm for a free case review at (213) 542-0940.