There are several criminal courthouses in the San Fernando Valley, a northern suburb of Los Angeles County.  I have been practicing criminal defense for twenty-five years since I first started, and for several years there were over 40 courts in Los Angeles county which made up a large portion of the budget in California.

The lawmakers in Sacramento decided to reduce the number of courts. As a result, there are now only 25, spread out throughout one of the largest counties in the United States. Los Angeles County stretches from Long Beach to Lancaster – and from Pomona to Van Nuys and all courthouses. So, how many courthouses are there in the San Fernando Valley?  Here is a list below.

It's essential to understand the individual courthouses in the San Fernando Valley if you have a criminal case being heard in one of them.  For example, some of them are more conservative than others – meaning they are more rigid on certain crimes. This makes sense because certain crimes plague some neighborhoods near the court. This means they need to be more challenging, or they will be overrun.

It's crucial to know the courthouse and the tendencies of the judges and prosecutors personnel. That's where your criminal defense attorney plays an important role. I know these courthouses very well, as I handle countless cases in each court.  I know who the judges are – I know who the prosecutors and their supervisors need to speak with to get you the best possible outcome on your criminal case.

When we meet, I want to discuss which court your case is pending. In this manner, I can give you valuable insight into how that courthouse will typically handle a case like your case. This is really what you want to know, right? You want specific information about the judge on your topic and how your court typically deals with your criminal situation.

For example, if you have a domestic violence case in the Van Nuys Court, you want to know what you are facing. What does this court normally do in domestic violence-related cases?  So, it doesn't always matter what type of charge you are  – instead, how the court, judges, and prosecutors will deal with your case.

When you come to my office to talk, I will always ask which courthouse is your case pending – what are your charges? – what happened? After I have all these details, we can plan an effective defense strategy to get you the best possible result.  That's done through experience.

I've been exclusively practicing criminal lawyers for a long time.  I've handled thousands of cases in Los Angeles and the San Fernando Valley Courts. I'm in one of these courts almost every day, and I've usually dealt with the prosecutor and judge assigned to your case – the same people you will be in front of.

So, this is one of the issues we will talk about.  We're going to discuss what you might be able to do and what information you might give me to help you get a favorable result on your case. Sometimes, pretrial motions can be very effective weapons in a criminal case.

The information you provide can support a defense strategy and mitigate the circumstances through character letters or letters from doctors.  We're not going to take the same approach in every case because we will focus our efforts on what will make a difference in your case.

This is crucial because you will often call attorneys who don't know anything about that courthouse. How does that help you? You need a criminal lawyer who understands the process and how to deal with a case like yours in the court where your case is pending.

If you continue down the hallway on the first floor of the San Fernando courthouse, the next courtroom on the left is The City Attorney's office staff department M. That courtroom. They usually have at least two Deputy City Attorneys in there, handling cases, dealing with attorneys and arguing motions, and discussing whether people should be able to be bailed out or not.

I am all over the county, but San Fernando is one of the courts I am in all the time, and I think the City Attorney's office in San Fernando is very reasonable and easy to deal with. I have had a lot of success in handling cases in that particular courthouse. Going back to the District Attorney's office, once you enter a not guilty Plea in Department S, the case will be moved into Department H, the Early Disposition Court. 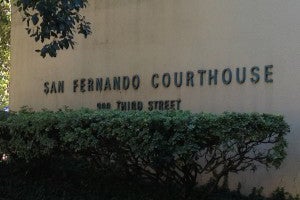 Going back to the City Attorney's office, once you enter that not guilty plea in Department M, you're now stuck in either Department A or Department B, and the case will be resolved in there one way or another. Either there will be a jury trial, and the jury will decide whether or not the client is guilty or not guilty, or there will be a negotiated plea between the defense attorney and one of the San Fernando Deputy City Attorneys who handle the misdemeanor cases in that particular courthouse.

They have prior convictions for a misdemeanor, and they're now being charged with a felony and vice versa. Then, as a defense attorney, you're going to have to deal with both the City Attorney's office and the District Attorney's office. So, it can get a little bit complicated. It can be a little complex – again, depending on the circumstances of the case.

So, pick up the phone and call the Hedding Law Firm. Let's talk about your court, and then we will start building a solid plan that makes sense for you and your circumstances to get you out of the court system as quickly as possible. For more information on your criminal court, click on the link below.