It is essential to know how to proceed if you are charged with a weapon or firearm because many rights can be lost and not recovered in these cases. The first right you should be concerned about losing relates to your right to have a gun for the probationary period or the rest of your life.

Many of you probably realize that one of the big things that the authorities love to do if you commit an offense involving a gun is to ban you from ever owning, using, or possessing a firearm again. Your best strategy in this scenario is to make sure that you hire a criminal attorney familiar with the courthouse your case is pending and courthouse your case is pending and how to defend firearm-related offenses properly.

One deciding factor in these cases is whether the subject weapon was used dangerously. The prosecutor and judge are concerned that you be a danger to public safety in the future.

I have noticed that the prosecutors are deathly afraid of giving someone a break related to a weapon case and then having it come back to haunt them in the form of a new offense that seriously impacts another person's life. They hate that, and they look to cover themselves from any future issues.

So the way to try and counter this is to show them that your actions were an aberration that will never happen again. We must show them that you made a mistake and that you are not someone they should have to worry about in the future. This can be done by focusing on the facts of the particular case and showing why you are not dangerous to the community at large. Another powerful way to show them who you are is through people you know and have come in contact with you.

This is done through character letters from people who know you and are close to you and through your boss at your job or upstanding community members who can vouch for you and your character and future dangerousness to the community.

Suppose you are charged with possessing an illegal assault rifle under California Penal Code 30605. In that case, I invite you to meet with me, and we can discuss whether you have a defense to this weapons offense based on the facts of your particular case.

I have handled many of these cases and know what it takes to defend them and when it is time to negotiate a deal. These cases must be taken seriously because they are very political cases. If the judge and prosecutor feel you are up to no good, they will be looking to send you to prison for a significant period. The policy behind assault rifle restrictions seems to protect law enforcement from those who would use an assault rifle against them to commission a crime and have an advantage over them.

Also, the authorities are trying to protect the general public from the firepower these weapons carry and their ability to deliver massive firepower quickly. Suppose the pin to the assault rifle is removed, and you can rapidly fire a lot of bullets in a short amount of time.

In that case, you fall right within what the legislature was trying to avoid when they passed legislation in this area, and the prosecutors and the judges will be zeroed in on this issue. California Penal Code 21810 PC makes it a crime to have possession of brass knuckles.

Felon in Possession of a Firearm in California

Our Attorneys are not only aggressive but also skilled, knowledgeable, and experienced in the area of criminal defense. We guarantee effective representation if you hire us as your criminal defense attorney.

Penalties for a Firearm Offense

Factors considered by judges to determine the penalty to impose whether the offense charges is being charged as a misdemeanor or a felony; the type of firearm that was used; the criminal history f the defendant; and whether the firearm offense subjects the defendant to any California firearm sentencing enhancements (which can add anywhere between 1 to 10 years in prison in addition to sentence received for an underlying felony).

Any felony that uses a firearm will be considered a strike under the California Three Strikes Law. We understand these are serious charges, and as your defense lawyer, we will do everything we can to get you the best possible results. If you face a firearm offense in California, contact us immediately and set up a free consultation.

Retain a Lawyer with Experience

Los Angeles County is particularly harsh for drug and gun-related offenses.  If somebody's selling drugs, they've got a weapon to protect the drugs either in their house, on their person, or in their car; the police will get them.  They'll arrest them.  The prosecutor will review the case and file some severe charges.

The gun allegation and the narcotics or the dope (CALCRIM 2304) usually cause a prison sentence unless the case is handled the right way. There can be mitigating something that gets you outside that prison gambit.  Nobody wants to go to prison.

So, if you've got a drug sales or possession for sales case under California Health and Safety Code 11351, along with an alleged gun allegation — in other words, having a gun in the immediate presence of the drugs — that's going to put you in a position where you're looking at the prison and a lengthy sentence of imprisonment.

You need to get to an attorney who has experience with dealing with those types of cases in that particular courthouse because there are a lot of drug-related offenses there. There are a lot of people walking around with guns. 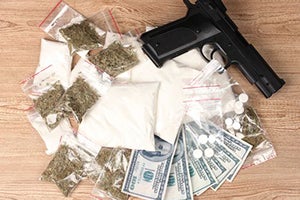 Whether they be just regular gun owners or gang members, that area is very harsh because they're trying to eradicate guns and drugs in Los Angeles County.

The courts are staffed by the Los Angeles District Attorney's office, and the judges are some of the judicial council, but it is its city, and it has its personality and way of doing things.

Believe it or not, you might think that a jury pool there if you take the case to trial is a straightforward one, but it's not.  It's conservative.  They're drawing jurors from Canyon County, Saugus, and Valencia — so it is a traditional jury pool that's very harsh on crime — especially gang members, drugs, and gun violence.

So, you have to get in there with a strategy.  If you or a loved one is charged with possession for sales or sales of drugs, if there's a gun involved, if there are gang allegations (CALCRIM 1401) involved, you're going to want to get an attorney's been down this road before.

Also, one who has handled these types of cases before in the San Fernando courthouse knows what to do, knows who to talk to, and if it's a defensible case where you might have some argument to either mitigate the charges down or even get the charges dismissed altogether.

Maybe there's an illegal search, for example.  Perhaps the search warrant was gotten, but it shouldn't have been given to the police to search a car or a home, or maybe the police just decided to explore on their own. They don't care.  They start grabbing stuff, claiming they're looking for registration, a license, insurance — when in reality, we know they're looking for guns and dope.