What Is Drug Trafficking Under California State Law?

Drug trafficking is an umbrella term. If someone is involved in the drug business and moves drugs around to make money, they are trafficking drugs. This type of drug crime carries severe penalties.

Usually, you see drug trafficking charges when people are moving large amounts of drugs that will later be broken down and sold to other individuals. The entities who make up a drug trafficking conspiracy would include the supplier, who makes the drugs, and the people who move the drugs.

A lot of times, these people are referred to as mules. Then there are the buyers and users of the drugs; there is a whole network of individuals involved in drug trafficking. Under California law, various statutes apply to drug trafficking:

Will Having A Valid Prescription Help Me?

If you have a prescription for the drugs you possess, it could provide you with a defense to a drug trafficking charge. Police and prosecutors are going to look at a host of factors. For example, do you have the drugs stored in the prescription bottle with your name on it? 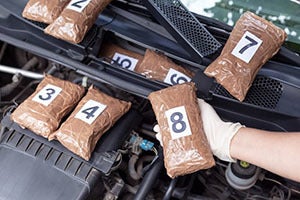 Did you have just a small supply for your personal use, or did you have an ample supply? Were you in the process of selling the drugs to other people? Were you pulled over for a routine traffic stop, and the police charged you with possessing the drugs for sale?

Additional factors to consider, like whether you had scales in your possession to weigh the drugs, records of drug sales, or baggies to break the drugs down and sell them to people. Did you have a wad of cash broken down into denominations?

If so, the prosecutors can make an argument that you were selling your prescription drugs to other people to gain money. It will make a huge difference, as far as what punishments you're facing, whether you were selling drugs or using them illegally.

The court will punish drug dealers much more harshly than they will an individual addicted to drugs or using them recreationally.

The penalties for drug trafficking vary depending on several factors, including whether the case is being prosecuted by the federal or the state government. In cases involving a sophisticated drug trafficking enterprise, a federal agency will usually initiate the investigation because they have more workforce, time, and resources.

A lot of times, local law enforcement does not have the time or resources for surveillance, for example. In a federal case, you can be looking at a 10-year mandatory minimum in federal prison. If the state prosecutes the case, there can still be significant penalties. If you have vast amounts of drugs, the condition can get some 15-year mandatory minimums. Generally, however, you're looking at less time if the state prosecutes your case. You want to discuss the case with an attorney so that you can move in the right direction.

Is Not Knowing Of The Drugs A Plausible Defense?

I get a lot of cases where people claim that the drugs found in their car are not their drugs, and they didn't even know that the drugs were in the car. We will have to look at the surrounding circumstances to get a feel for whether this defense could work.

If it is your car, it's presumed that you should know what is in it. If you rented a car, you only had the car for an hour before being pulled over, and there were drugs found in it, you might have an argument that you didn't put the drugs in the car. You would be able to prove that you just got the car and had no idea that the drugs were in it.

Another common scenario is a large group of people in a car. Police pull it over and find drugs. They're going to look at the circumstances of the drugs in a backpack with someone's name on it, for example. The driver will likely be charged if the drugs are found in the center console. Since the police know that people will try to get out of being responsible for the drugs, they may threaten to arrest and charge everyone.

Suppose you're in a scenario where drugs were found in a car and were not your drugs. In that case, you want to get an experienced criminal defense attorney and be honest with the attorney because the attorney will call the police report.

The police will make their best argument as to whose drugs they were and why they believe that. Then, your defense attorney will examine the circumstances and argue on your behalf. Hedding Law Firm is a criminal defense law firm located in the San Fernando Valley area of Los Angeles County at 16000 Ventura Blvd #1208 Encino, CA 91436. Contact us for a free case evaluation at (213) 542-0940.