Criminal Defense Attorney in the City of Glendale, CA

Glendale has its courthouse, and that city has a police department known as the Glendale Police Department, which is mainly responsible for arresting and investigating crimes in Glendale. I've been practicing there for 26 years and have handled hundreds of cases in the Glendale courthouse.  I am very familiar with the prosecutors and judges and how things work there.  It is a small town and a very conservative town.

I remembered in 1997, I had a big murder case that ultimately ended up getting dismissed, and it started in the Glendale court.  There were multiple defendants. Finally, after the preliminary hearing, the case got sent to Pasadena because Glendale is not big enough to have the capacity to do felony trials.  In the Pasadena courthouse, that judge ended up dismissing the case and saying there wasn't enough evidence.  The murder was such big news.  The paper was there.  The case was in the form.

So, if you want to know about Glendale and the courthouse in that city, realize it's a small city, and it's a conservative police force, and they're looking to catch people involved with criminal activity.  The judges are tough on sentencing there.  The prosecutors are tough. 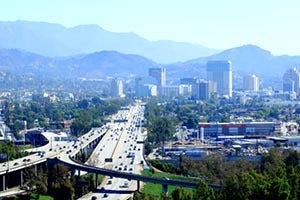 Even though it's in the City of Glendale, the prosecutors are staffed by the District Attorney's office out of Los Angeles county.  They also have several judges there. But it's not a very big courthouse.  There are probably only about ten courtrooms, and not all of them are used for criminal cases.  So that gives you an idea that it's not a very big area to handle issues.

So, most of the cases there are misdemeanor cases, so you want to get a local attorney to that courthouse who has practiced there.  As I indicated, I've been dealing with issues in the city of Glendale now for 26 years.

There's probably about a 7-mile radius of cases. Suppose anybody is arrested and charged with a crime. In that case, they're going to be sent to the Glendale Superior Court, or you have other jurisdictions like Burbank, Pasadena, downtown Los Angeles — all kind of in the vicinity of Glendale.  So, they don't usually have a vast pool of cases.

So, suppose you have a criminal case pending there. In that case, you want to hire an attorney that has experience dealing with the authorities in Glendale knows how to try an issue if you're going to do a jury trial, ad usually, as I indicated, most felony trials will end up in Pasadena. Still, misdemeanor cases can end up in trial there. You would pick a jury, and then obviously, if you were found not guilty, you would be done.  If you were found guilty, then a judge would have the opportunity to sentence you.

If you go to trial and lose, you're in a much worse position than if you work something out before the trial because the prosecutors in Glendale have only so many courtrooms to be able to handle cases, so they try to give the best resolutions before trial so their courts don't get clogged up.

As I write this post on my website, the Glendale courthouse isn't trying many cases at all.  Most misdemeanor cases are continued for approximately 60 to 90 days to deal with the coronavirus. There probably aren't going to be many trials in the year 2020.  I don't think they're going to have the ability to get as many jurors in as they need, and most of the Glendale population will want to stay home to be safe.

So, if you have a case out of the Glendale courthouse and you need some help, pick up the phone.  Make the call.  We'll talk, and I'll put my experience to work for you to get you the best possible resolution on your case. Hedding Law Firm is a criminal defense law firm located in the San Fernando Valley at 16000 Ventura Blvd #1208 Encino, CA 91436.