Any time somebody is convicted of a domestic violence-related offense, the victim or victims of that case are entitled to restitution related to what happened.  In other words, they're entitled to get back any money that they lost based on the person's actions. For example, somebody was punched, and their teeth were knocked out, and they had to go to a dentist to get new teeth.

The person who punched them will be responsible for giving back the money to get new teeth.  If they lost any work due to being punched in the face, then the person would have to pay whatever money they could prove that they lost. Of course, there are all kinds of different examples of people losing money related to criminal domestic violence cases. The way they get their money back is in the form of restitution. 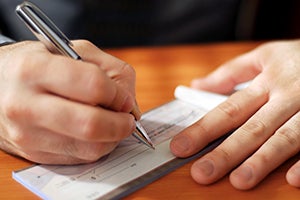 So, it's the prosecutor's job whenever they have a domestic violence-related event that they've got to seek restitution in the particular case.  So, what ends up happening is, if the person goes to trial and wins and is found not guilty, they don't have to worry about criminal restitution.

Of course, the other party can sue them if they want to and try to get the money that they might have lost, but the criminal court will have nothing to do with it if the person is found not guilty.

If, on the other hand, they're found guilty or if the prosecutors have good strong evidence against them and they end up working out a deal, then part of that deal is going to be the person is going to have to agree as part of their probation terms that they have to pay restitution to the other party or parties that are involved in the case.

If they end up going to prison and are not put on probation, then that person will be ordered to pay restitution by the court, and the other party can try to collect it as part of a civil judgment, or the parole department can get involved if they chose to.

Payment of Restitution and Probation

Once the court orders the person to pay restitution as part of the terms of their probation or as part of their agreement in their case, then that person can argue that the refund claimed is not fair. Usually, the prosecutors have an exact amount.  You talk to them about it.  If you agree to it, then that's the amount of restitution there is in the case.  The person will be ordered to pay either all of it or a certain amount, and they can make payments on that through the probation department.

The court will then hear evidence from the party that's claiming restitution.  The prosecutor will direct examine them on the witness stand under penalty of perjury.  The judge can ask any questions, and also, your criminal defense attorney can ask questions of that person.

The reality is that the restitution paid should be whatever the person is out-of-pocket based on what the defendant did to them.  I can tell you right now that everything is slanted toward the victim when it comes to criminal restitution. There are all kinds of cases and statutes, but you can see that every single one of them is trying to help the victim get money.  So, you've got a very tough row to hoe if you're trying to challenge a restitution case related to a criminal filing.

Your best bet is to have your attorney deal with it.  Let them fight it out with the prosecutor or judge to get the best possible result regarding criminal restitution in a domestic violence case in Los Angeles county.