There's a sliding scale for domestic violence cases in Los Angeles. Some are on the low-end scale, where a person is accused of doing something. In the low-end type case, the alleged victim has no injuries, or maybe it was a mutual combat situation where both parties were arguing or fighting. Whatever the case may be, the police end up having to come out.

The policy is that if they come out, and there's been any domestic violence, and they're concerned that it might continue, they're going to arrest one of the involved.

If they can't figure it out, they'll arrest both people involved. We might even be able to talk to the prosecutors about those cases and avoid a filing altogether, especially if there is no injury, or if it's unclear who the aggressor was, who's at fault, or if there's a self-defense argument.

Then, there are high-end of the spectrum cases in which the police come out, there are horrible injuries, and it's clear that the accused has inflicted injuries on their significant other. The accused usually admits it, talks about it, and the police take pictures of the incident. That's the extreme example. Then, there is everything else in-between. It's unbelievable what's going on out there right now, especially with the Coronavirus. 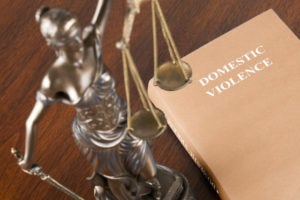 Since people are trapped together, domestic violence has become a common problem. There are all sorts of different types of domestic violence situations. Still, your best bet is to hire an attorney who's seen all of those situations, knows how to handle them, knows how to move forward in a positive direction, and gets you the result you need based on the circumstances you find yourself in.

I've been doing this now for 26 years. I've handled thousands of domestic violence cases. I've tried them before a jury trial, and I've been successful.  Of course, I know when it's not a good idea to try and fight the prosecutors because they have the evidence to prove the case, and then we are going to work out a resolution. We are going to do damage control. We are going to put a mitigation package together.

If you are being charged with domestic violence, not everybody gets treated the same because it's not all of the same factual situations, and not everybody has the exact attorney. If you have an attorney that's not going to fight for you and will not present all of the mitigating evidence, mitigating evidence, then you're not going to be successful. You've come to the right place; if you need help, pick up the phone and ask for a meeting with Ron Hedding. I stand ready to help you.

Is It Possible To Get Into Some First Offender Program?

There are first offender programs for domestic violence situations. You do a 52-week batterers intervention course once a week. It is designed to teach people how to deal with domestic violence-related anger issues. It helps them in situations that deal with anger towards significant others. It shows them what to do and how not to resort to violence. It teaches you about not putting yourself in that position again, where you're getting arrested and posting a $50,000 bond.

You don't want to be in that scenario. You want to be in a position where you can walk away from the other person. And, if this is not the right person for you, you can make arrangements to get rid of that person so that you can move on and have a healthier life.

You'll be put on probation for three years in first offender situations and first offender programs. There'll be other terms and conditions, and those would be whatever your attorney can negotiate for you. Of course, they're designed around what you supposedly did and what the prosecutor and judge feel is the best way to handle your situation.

Will I Still Have A Criminal Record?

If you ended up getting convicted of trespassing, for example, then you have a trespassing conviction on your record that you could probably get expunged or dismissed later on. It doesn't go off your record, but it shows as a dismissed case. That gets a little bit complicated in domestic violence cases where people are being arrested for one thing but convicted of another thing.

The record shows what you're arrested for, it shows what you were convicted of, and ultimately, if you can get it expunged or dismissed, when people look it up, they'll see that it's expunged or dismissed. The only way you can wipe a domestic violence record off is to be in a position where you are not charged with domestic violence. That way, you have no charges appear on your record.

As a result, if somebody runs your criminal record, they won't see anything.  However, getting that done is not an easy situation. The bottom line is that you have to hire an attorney who has a lot of experience. Let that attorney go to work for you. Your attorney can determine what makes sense under your domestic violence case's circumstances and factual scenario.