Strategy When Drug Use is Reason for a Crime

Many crimes committed throughout California, such as in Los Angeles and the San Fernando Valley, are saved because the person is involved with using drugs and an addict. That's the basis for the crime.  You obviously can't permanently hide behind drug use if you commit crimes.

Voluntary intoxication, where you take/ingest the drugs or alcohol yourself, is typically not a defense to a crime in California, even though we see many people committing crimes because they are involved with drugs. Our Los Angeles criminal defense lawyers provide an overview below to determine the best defense strategy to fight charges when the defendant committed a crime due to their drug addiction.

A conviction for HS 11350 carries a sentence of up to one year in county jail and a $1,000 fine, but most first-time offenders can get the charge dismissed by completing a PC 1000 drug diversion program or drug court.

Under Health and Safety Code 11351 HS, drug sales make possession for sale of a particular controlled substance a severe felony crime. If the prosecutor can prove you possessed the drugs with the intent to sell them, you are facing harsh penalties. The list of the drug covered under HS 11351 include:

Sale or transportation of drugs under California Health and Safety Code 11352 HS makes it a crime to sell or transport certain controlled substances, primarily narcotics such as cocaine, heroin, and popular prescription drugs. HS 11352 makes it a California drug crime to: 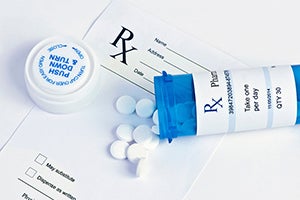 HS 11173 provides penalties for any patient who, through fraud, deceit, or misrepresentation, obtains, or makes an attempt to get, a prescription from a medical professional for a controlled substance, such as a painkiller. Some of the most common prescription medications that are fraudulently obtained include:

Drug manufacturing under California Health and Safety Code 11379.6 makes it a crime to manufacture, convert, produce, process, or prepare, either directly or indirectly, by chemical extraction or synthesis, any controlled substance.

The most common example of charges under HS 11379.6 is when someone is operating a methamphetamine lab or required to mix chemicals to make narcotics.

This felony drug crime carries a sentence of up to 7 years in state prison and a fine of up to $50,000. There are also aggravating factors that result in a longer sentence, such as manufacturing large quantities of certain drugs and having prior convictions.

Treatment in a Drug Program

The question becomes, what is the best strategy?  Sometimes, the best approach is to get the person into a drug program. This is important to show the prosecutors and judge that they're willing to help themselves, and since that was the basis of the crime, they likely won't commit any more crimes.

Now you're in a position to make the argument that that is sufficient punishment and potentially try to prevent a conviction, prevent jail time, or prison time for that particular individual. Also, there are situations where drugs can be a defense to a crime — if it is a specific intent crime, for example, an attempt to murder.

You have to have the specific intent to kill.  If you're so high on drugs or alcohol and can't form the clear intention to kill, that can be used to defend attempted murder. But, there are other crimes, assault with a deadly weapon, for example, that they could substitute in place for that attempted murder charge and still try to get the conviction, but attempted murder is a perfect one to get rid of.

So, we need to figure out the root of the problem. Often I have parents family members calling in, trying to help a particular individual, and we get ourselves in the difficulty of not wanting a conviction on the person's record. Still, this person needs help seriously.

They're going to kill themselves.  We want them to be in custody for some time to dry themselves out.  Of course, as a criminal defense attorney, my primary job is:

But I also have an eye towards trying to help the person, not only out of the jam they're in but also future jams, and help them as human beings who are potentially going to kill themselves using all of these drugs. I've been in this situation many times, having practiced for almost three decades.  I've seen the destruction that drugs can have on a person's life and family.  I know how to help people.

I know what it takes to get an overall resolution and develop a game plan—not just talking to the person but talking to the family. My allegiance is always to the client, but I want to hear from the family too because a lot of times, the family can give me some compelling insight that can help not only resolve the case but set up a game plan that truly helps the person, and in turn, helps their family.

If you're looking for the best and you've got a drug case, or you have a family member that has a drug case and the drugs are the basis for the crime, then pick up the phone.  Make the call.  Ask for a meeting with Ron Hedding. Sometimes people hallucinate and take so many drugs, and commit a crime.  They see things that aren't there.

Sometimes they have mental issues combined with drug/alcohol use; whatever the case is, pick up the phone.  Ask to schedule a consultation with Ronald Hedding.  I stand at the ready to help you. Hedding law firm has two office locations in LA County. We offer a free case consultation by phone or contact form.