Knowing the Tendencies of the Court

The Van Nuys court prosecutes a lot of drug crime cases, mainly handling the jurisdiction in the San Fernando Valley for people who are charged with possession of drugs, possession for sales of drugs, sales of drugs – whether it be methamphetamine, cocaine, GHB, ecstasy, PCP or any of the other drug-related offenses.

So, suppose you have a drug case. In that case, you're going to want to get an attorney who is familiar with handling drug cases – whether it be the case of a sale where you might be looking at jail or prison time or a straight possession case where you could avail yourself of some diversionary program or get into the drug court to try to avoid a conviction with a drug-related offense.

So, it's essential if you have a Van Nuys drug case pending that you get with an attorney who has handled these types of patients before and knows what the tendencies of the judge and prosecutors are as far as these drug crime cases. I've been defending these cases for twenty-five years now, and I've seen the drug charges change as the various propositions have been passed. Then the Governor of California has been instrumental in doing many things that help people who are charged with drug crimes.

Where you're probably not going to get a lot of help from the propositions or the Governor is if you're charged with selling or possessing for sales drugs. Those are the people who are moving drugs and making money from it and getting people addicted to drugs, and the prosecutors and the judges don't take kindly to that type of behavior. Our Los Angeles criminal defense attorneys will review further below.

So, if you have a California possession for sales or a sales drug-related offense, obviously sit down with somebody like me who has been doing this for a long time. I know how to handle these cases. Sometimes, instead of being charged with sales, you should just be accused of straight possession. 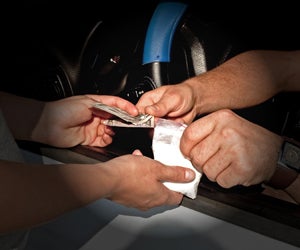 Other times, they have evidence that you're selling drugs, and we need to try to keep you out of prison. Nobody wants to go to jail. When it comes to selling drugs to the community, they're going to consider you a danger to the community, and the Van Nuys court judges will want to put you into prison or jail.

So, this is something that I have a lot of experience with. I have you come in, and we will have a meeting. We go over everything, and sometimes there's more than meets the eye in these drug cases, and we can sit down and get a good strategy together on how we're either going to defend your drug case.

Also, how we're going to try to mitigate things and do damage control so we can get you out of the system as fast as possible, protect your record, and protect you from going to jail or prison. There're all sorts of different things that can be done, again, depending on the case – what happened, your background, the circumstances, and what evidence the prosecutors have to prove the case. Maybe rehabilitation instead of jail time is possible.

Consult with a Drug Crime Lawyer

I see a lot of in these drug cases is the police do a one-sided investigation. They don't get your version of events, and I think that's where a good criminal defense attorney who does a lot of Van Nuys drug crime cases can come in handy to be able to get your side of the story across.

Get all the facts and circumstances that are helpful to you because the police aren't looking for that when they do their investigation. So, now it's time to get the other half of the inquiry – the defense side of the study – and that's what I'm exceptionally talented at and good at. So, if you have a Van Nuys drug case, give me a call. We'll go over everything in the privacy of my office, and you'll leave with a plan in mind so that you can get this case taken care of effectively, efficiently, and with the least amount of damage to you, your record, your freedom, and your rights.