Assault with a Deadly Weapon Charges in San Fernando Valley

The obvious — guns, knives, but it could also be your shoe or your fist.  Suppose you hit and hurt somebody terrible enough. In that case, the prosecutors can mount the argument that the weapon that you're using — no matter what it is — a baseball bat — anything can be a deadly weapon if used in such a way that it could cause great bodily injury or death to the victim.

If you get any jail or prison time, that time will be served at 85%.  So, the San Fernando Valley treats these assaults with a deadly weapon case pretty seriously. They are prosecuted under Penal Code Section 245.

Defenses for Assault with a Deadly Weapon

Often, what we try to do is first decide whether or not there are any defenses to the crime.  In other words, can you make an argument that it's self-defense and take the case to a jury trial and show the jury that you were defending yourself. 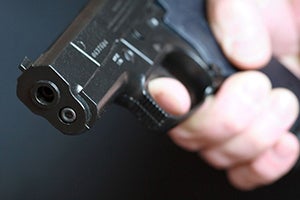 If you argue that you weren't the one that did whatever it is that's being claimed, that could be a defense as well, if they're having problems with proof, issues of identity, no eyewitnesses, etc.  So, when you look at these assaults with a deadly weapon case, you first want to see if you have a defense.

If you don't have a defense to the case because they have the evidence against you, then another strategy we might employ is to get a conviction for something other than assault with a deadly weapon in one of the San Fernando Valley courts.

The way we do that is plea bargain, negotiate, show mitigating factors to the prosecutor and judge, and try to get the prosecutor to change the charge to a lesser charge.  For example, they could charge you with Penal Code Section 245(a)(4), which is assault likely to produce great bodily injury.

See related: How to Get Not Guilty Verdict for Assault with Deadly Weapon?

So, we're looking at the case, seeing what the prosecutors are claiming you did that's illegal, and then assessing how serious that is.  Another thing that they look at in the Valley courts like San Fernando, Van Nuys — any of the courts in the San Fernando Valley — is they're going to look at your criminal record.

Do you have a past of doing this type of behavior?  In which case, they'll be a lot less likely to change the charge, and they're probably going to try to seek prison time against the person that has a record of this type of behavior. If, on the other hand, you have no criminal record, we can make the argument that whatever happened here was an aberration.  It's not going to happen again.  One of the biggest things you want to do if one of the San Fernando Valley courts charges you is to get your side of the story out through your attorney.

So, it's our attorney's job to tell the prosecutor — who's the lawyer who is the one that is in charge of what is going to be filed against you and what they're going to argue punishment-wise — what the whole story is. If there are some mitigating circumstances related to what happened, your attorney's job is to get that out to the judge and the prosecutor.

Just like your attorney in these cases should be discussing mitigating factors — may be getting some character letters together that shows the type of person you are. If you've got a job or have immigration issues — whatever the case may be, it's your attorney's job to grab all those good points about you and make sure that the judge and the prosecutor know about them.

I submit many of these in the name of a mitigation package to the prosecutor, and then we sit down and talk about it. I'm usually talking with the more senior prosecutor when I'm trying to resolve one of these assaults with a deadly weapon case.

I go to their office in one of the courthouses, and we go over everything.  I go in there with a game plan after talking to you about it and what we're going to be willing to accept to resolve the case. So, if you're charged with assault with a deadly weapon in the Valley, and you need help, pick up the phone now.  Make the call  I stand ready to do everything possible to help you.