How to Get Not Guilty Verdict for Assault with Deadly Weapon? 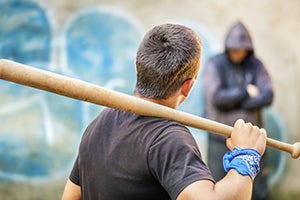 So, getting a not guilty verdict is both simple and challenging.  Just have your attorney show a jury that the prosecutors did not meet the elements of assault with a deadly weapon.  Therefore, you're innocent, and thus, you get the not guilty verdict.

However, the problem and complicated part of this is that police and prosecutors don't arrest and charge somebody with assault with a PC 245(a)(1) deadly weapon unless they've got the evidence to prove it.  So, therein lies your issue.  What evidence will the prosecutors use to prove you guilty of the charge?

You have to look at the elements and compare the elements they have to the elements of the crime (CALCRIM 875), and then you will have your answer as to whether or not you can get that not guilty verdict.

Of course, you'll want to do this with an attorney who has the experience, handled these cases, has been successful, and got a not guilty verdict. Our Los Angeles criminal defense lawyers will discuss this topic in more detail below in this article.

What is Assault with a Deadly Weapon?

The crime of assault with a deadly weapon is defined under California Penal Code 245(a)(1) PC and known as “ADW.” This statute describes this offense as when somebody attacks another person, or attempts, to use a deadly weapon, not a firearm, or by means that are likely to cause a significant bodily injury (GBI).

The related crime of assault with a firearm is defined under a different law, Penal Code 245(a)(2) PC. Prosecutors will typically use the PC 245(a)(1) ADW statute to file charges against somebody after an illegal attempt to injure someone using a deadly weapon.

So, what is considered a “deadly weapon” in the state of California? It can be almost anything capable of being used as a weapon causing a severe injury—for example, a knife, razor, baseball bat, or any other similar item.

See related: Assault with a Deadly Weapon Charges in the San Fernando Valley

What Are the Penalties for ADW?

ADW is a California “wobbler” that the prosecutor can file as a misdemeanor or felony crime.  If the assault with a deadly weapon case was initially charged as a felony by the prosecution, we might be able to get it reduced to a misdemeanor crime by:

It would be a straight felony crime if the victim were a police officer or firefighter. If convicted, the penalties include up to five years in prison, but you can be sentenced to 12 years if a firearm is used.

See related: Is Assault with a Deadly Weapon a Strike?

What are Similar California Crimes?

What are the Best Defenses for ADW Allegations?

You're in luck; you've come to the right place.  I've handled many assaults with a deadly weapon case.  I've negotiated them and tried them in a jury trial and got not guilty verdicts for my clients.

You have to realize, particularly with this crime, because I've tried many cases, that there's no physical contact necessary for the prosecutors to get a guilty verdict.  I don't think you can get the not guilty verdict because the alleged victim wasn't touched and there are no injuries.

See related: Best Strategy for an Assault with a Deadly Weapon Case

Can I Use a Self-Defense Argument?

On the other hand, if somebody points a gun at you and you point your weapon back to show them they're not just going to shoot you, you will respond in kind. In other words, a self-defense argument.

Now, you're meeting with the same deadly force used against you, and under that specific scenario, you could get a not guilty verdict.  There's a good chance that if those are the facts of the case, the prosecutors aren't even going to file the claim.

So, there's always more to it than meets the eye.  Sometimes the truth lies in the middle, and I'm always looking to assess the case very openly and honestly so that I can do everything I possibly can to get that not guilty verdict for my clients if that's what they deserve and that's what they want.

Sometimes you can want a not guilty verdict in an assault with a deadly weapon case in one of the Los Angeles County courts, and you can't get one because you're guilty. They've got the evidence.  They've got you on video pointing a gun at an unarmed person.  That's going to be a problem for you. There could be circumstances where you could do that.

There could be circumstances where that's justified. Still, unless the events were explained, you had better realize that to get a not guilty verdict, we will have to go down the road of defending your case in front of a jury.  We can certainly do that.  We can do that.  I've done that many times for my clients.

So, if you're looking to get a not guilty verdict in an assault with a deadly weapon case, pick up the phone now.  Ask for a meeting with Ron Hedding.  You'll be meeting with somebody who's done this for 30 years.  I've worked for the prosecutors.  I've worked for a superior court judge, and I've been a criminal defense attorney defending people just like you since the early 1990s and getting successful results.

We'll first evaluate whether we can get that not guilty verdict. We will look at the evidence.  The next thing we'll do is pull out the jury instructions, and we will talk about the evidence and how it relates to your case.

Once we've done that, we're in a natural position to assess whether you can get a not guilty verdict in your criminal case, and we'll decide.  If we decide to take the case to trial, we will investigate it, we will prepare it if any motions are necessary to set it up the right way for trial.

We will file motions, argue, and do everything we can to win them, and then we will be prepared to fight in front of a jury on your behalf.  Make no mistake about it; if you want a not guilty verdict, you'd better have a great attorney.  You can't have an attorney who doesn't have experience against a prosecutor who will beat him.

A lot of time, just because you're charged, juries think that you must be guilty.  So, you need an attorney who can turn the tide on that and show them that just because somebody is charged doesn't mean they're guilty.

They are presumed innocent, and if the prosecutors don't prove their case, you must find the person not guilty. We might be able to negotiate for reduced charges or a case dismissal. Through prefiling intervention, we might be able to convince the prosecuting agency to file formal criminal charges, called a “DA reject.”

Pick up the phone now.  Make the call.  Set up a meeting with Ron Hedding.  I stand at the ready to help you. Hedding Law Firm is based in Los Angeles and serves people across Southern California. We offer a free case review by phone or fill out our contact form.