Is Assault with a Deadly Weapon a “Strike” in California?

California Penal Code 245(a)(1) PC describes the violent crime assault with a deadly weapon as when a person attacks, or attempts to attack, someone else with a deadly weapon, other than a firearm, or in a manner that is likely to cause great bodily injury.

A “deadly weapon” in the context of this statute is almost any item that can be used as a weapon causing a severe injury, such as a knife, bottle, brick, razor blade, and more. ADW under PC 245(a)(1) is a California “wobbler,” which means the prosecutor has the discretion to file the case as a misdemeanor or felony offense.

Penal Code 245(a)(1) defines assault with a deadly weapon as follows:

Our Los Angeles criminal defense lawyers provide readers with a more detailed review below. PC 245 Subsection (a)(1) says that any person committing an assault on another individual with a deadly weapon or instrument other than a firearm is guilty of a wobbler crime. In a situation where ADW is initially charged as a felony, it can still be reduced to a misdemeanor crime by the following action: 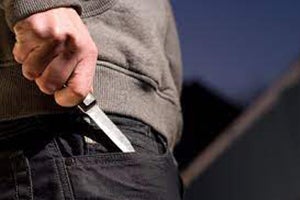 If the victim was a police officer or firefighter, the ADW is a straight felony punishable by five years in state prison. If an actual firearm was used to commission the crime, the penalties increase up to 12 years in prison.

Some people ask, what determines whether California Penal Code 245(a)(1) assault with a deadly weapon is filed as a misdemeanor or a felony?

The next thing is, what type of an assault with a deadly weapon are you charged with? For example, Penal Code Section 245(a)(4), an assault likely to produce great bodily injury, is not a strike. Typically, it's filed as a felony.

You could face prison time for that, but it could also be reduced to a misdemeanor if you end up getting probation and can complete your probation.

So, what ended up happening is a lot of times when people were charged with a new felony, and then the prosecutors because there was eventually language put in about assault with a deadly weapon, tried to claim that it was a strike.

Defendant Pleading to a “Strike”

Criminal Defense for Assault with a Deadly Weapon Cases

However, it's still crucial to have a criminal defense attorney who has experience dealing with PC 245(a)(1) assault with a deadly weapon case. Often, I've been able to avoid a strike by getting a different Penal Code Section from the prosecutors to allow the defendant to plead to if it's the appropriate case for that.

You need to understand the three-strikes law completely, assault with a deadly weapon case, Penal Code Section 245, and all related sections to truly represent somebody and avoid a strike.

Because if you get convicted of a strike, for example, Penal Code Section 245(a)(2), assault with a firearm, it is a strike.  It's a serious felony. As I made this post in 2021, you would only serve 50% of the time in custody of whatever custody time you got.

However, if you were hit with an assault with a deadly weapon under a Section that was a violent felony, you would end up serving 85% of the time you got because for all violent strikes, you have to do a higher percentage of time in California.

So, if you or a loved one is facing an assault with a deadly weapon charge, you're trying to avoid a conviction or avoid a strike, depending on whether or not there's good evidence against you, you've come to the right place.

I've been handling these assaults with a deadly weapon case since the three strikes law came into passage nearly three decades ago. I know what it takes to get the best result.  I've worked for the DA's office.  I've worked for a Superior Court Judge, and since the early 1990s, I've been a criminal defense attorney defending people just like you and getting great results.

Pick up the phone now.  Ask for a meeting with Ron Hedding. I stand ready to help you. Hedding Law Firm is located in Los Angeles County, and you can reach us for a free case consultation by phone or by filling out our contact form.