Theft Crimes Defenses Will Depend on the Facts of the Case. One defense is that you're not the person who stole whatever is claiming to have been stolen, and the prosecutors do not have the evidence to prove that you are. So, that would be more of an identification-type issue related to a theft crime offense.  Another one is, and I've seen this theft at either supermarkets, stores in the mall, high-priced places like big retailers,  the person takes certain items without the intent to steal them, and the authorities there act too quickly in grabbing the person.

For example, if they haven't left the store yet, then the person would argue that they were going to pay for it.  They were still shopping around.  Or sometimes I've seen people who have to rush out to their car because they don't have the money with them and it's in the car.  Many different things can amount to a defense.

The defense will have to make sense to anybody listening to it.  If they see it just as some charade to mask the theft, then a potential jury will not buy that, and you're going to have a real problem not being convicted. There are other defenses to theft crime cases, but of course, they will center around the facts of your particular case.  In other words, what happened?  What are you being accused of doing?

Sometimes people are accused of theft, and it's their property they're allegedly taking.  That I can see come up in a husband/wife divorce situation where the wife, for example, is claiming the husband is taking something that doesn't belong to him when in reality, it's a community property state, so it is the husband's property just as well as it's the wife's property.

You can think of a whole host of different examples. Still, anytime you're looking at defense in a theft-related case or any criminal case, you want to look at the overall picture of what happened and then use your common sense to see if that defense will make sense under the circumstances of the case. Sometimes people have a hard time stepping outside of their case and the fact that they're facing jail and prison time, then really evaluating the case neutrally.  That's kind of what you have to do.

And suppose you can't evaluate things neutrally. In that case, your bests bet is to let a criminal defense attorney assess things for you because a criminal defense attorney is going to be able to look at things and give you a good perspective on what your chances are of success in a theft crime offense and whether you do have a defense to the crime. 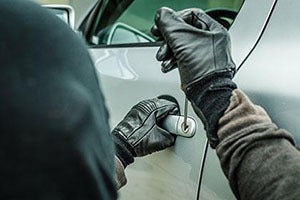 For example, you have to be accused of taking somebody else's property.  If you're taking your property, the prosecutors will have a problem because you can't steal your property.  You've got to be taking it without the person's permission.

If you have permission to use your friend's car or use somebody's vehicle, and then all of a sudden that person gets mad at your and tries to take it away, and they don't do it effectively, then you might have a defense to that theft-related offense that you're being charged with.

So again, you have to look at the circumstances of what happened before we can evaluate whether or not you indeed do have a defense, and you've got to get an attorney who will be honest and straightforward with you.

They will let you know whether your defense even makes any sense or not and whether or not they think you could win at a jury trial.  I've done over 200 jury trials over 25 years, so I have a pretty good feel for when a case be defeated, win a case has no chance to be won, and when it could go either way.

You need to know that information before you decide to assert a defense in a theft crime. Otherwise, you're going to pay money, go to trial, waste time, be stressed out, and end up with a conviction anyway and probably a more severe sentence than if you would have just worked things out.

Related:
Getting an Impossible Successful Result in a Grand Theft Case