Criminal Defense in the City of Van Nuys, CA

I don't know if most people realize that I've been practicing criminal defense in the Van Nuys courthouse and surrounding communities now for 26 years, and that whole area — especially if you live there — you probably realize is a vast area for all sorts of activity — good activity and bad activity.

There's criminal activity going on around the courthouse.  I see a lot of cases that I get in the Van Nuys courthouse are right from the city there in Van Nuys.  Van Nuys Boulevard is the main thoroughfare there, so there's a lot of action going on.

You have the criminal court building, which is its building.  Then there's the civil court building right there.  There's a bunch of parking structures.  So, if you've got a case there and you hire somebody like me, I'd like to give you a little perspective of what's going on there.

You have to go through a metal detector to get into the courthouse.  You don't want to bring anything in there that could perceive as any weapon.  I wouldn't get any type of lighters in there.  Nothing that's a knife — even a little pocketknife — or something that generally would be legal. 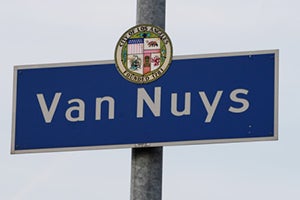 They're not going to let that inside the courthouse.  There's no free parking around there.  You'll either have to park at a meter unless you can somehow find two-hour parking, but you'd rarely be able to see that because residences surround that courthouse, so they'll usually take up anything free.

So, you can park at the meters, or they've got parking lots there.  The fee for parking ranges from five to ten dollars, depending on exactly where you park. Once you park, you'd go into the courthouse.  The courthouse in the city of Van Nuys opens at 8:00 a.m., and they start letting the public in.

Right now, because of the coronavirus, you can't even get into the courthouse unless you have a case, and they're usually standing out front asking you whether or not you have a case. They're going to look you up on their list to see if you're on it for that particular day.  They will not let family members in the courthouse who don't have cases because of the coronavirus.

There's a lot of action going on in the city of Van Nuys, ranging from prostitution on Sepulveda Boulevard to drug cases, gun cases, gang activities.  Several gangs in the San Fernando Valley are arrested and prosecuted in the Van Nuys courthouse.

There are all sorts of theft-related offenses.  I've seen prostitution activity, pimping, and pandering.  There's such a range of activities going on.  You pretty much hit on every single crime. Domestic violence cases are also prevalent. My main office is Encino, so I'm about ten minutes from the courthouse.  I do a lot of business there.

That's my favorite courthouse.  I know the judges there pretty well.  I know the prosecutors.  In the City of Van Nuys, you have the City Attorney who prosecute misdemeanors, and the District Attorney's office prosecutes felonies.

That's pretty much the dividing line.  There are exceptions.  Depending on where the case is, the DA's may be handling a misdemeanor, but usually, the court is closed down in Malibu, so they have divided the cases between Van Nuys and the LAX court.

Jurisdiction of the Van Nuys Court

The Van Nuys court handles most of the Valley — the middle of the Valley, West Valley.  North Valley is dealt with by the San Fernando court and jurisdictions like Pasadena, Burbank, Glendale — they have their little courthouses there. But Van Nuys probably handles most of the cases in the San Fernando Valley, so you want to get somebody local to that court — which I am and has dealt with hundreds — I've handled thousands of cases in that courthouse. So, if you've got a case, pick up the phone.  Make the call.  I stand at the ready to help you.