So, a lot of people are ending up being involved in accidents.  If somebody dies in the accident, the police immediately start thinking, should this person have died?  Or is this just a simple accident, or is there something more at work here? These vehicular manslaughter cases in the San Fernando courthouse can come up in many ways. 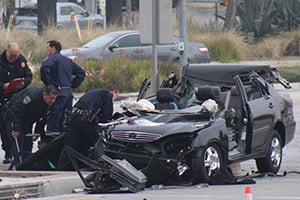 The most obvious one is that somebody is drinking alcohol and driving and gets in a bad accident and kills somebody. That person can be arrested and booked for vehicular manslaughter.

Then, many times in Los Angeles County, I see prosecutors filing those facts as a murder case because of what they call the Watson case. This says that:

Our Los Angeles criminal defense lawyers will cover this topic in more detail below in this article.

So, that's one thing that can happen.  Some others can happen where someone could be charged with vehicular manslaughter based on a situation where there's no alcohol involved.

Maybe they're racing down the street or traveling at a breakneck speed which is very dangerous to human life, and they end up getting in an accident and killing somebody.  I've seen vehicular manslaughter cases filed out of that factual scenario.

It isn't fair to file a vehicular manslaughter case against somebody who merely gets into an accident — a regular fender bender and somebody dies. In my opinion, that is not a criminal case, and I argue those cases all the time.  You start to creep into criminal behavior when somebody is drinking alcohol, using drugs or doing something hazardous that the average person wouldn't do.

Then, if you're the police or prosecution, you can start to get into the position to try to get somebody for vehicular manslaughter. But when you have a scenario where people are just involved in a minor fender bender, and it's even questionable who is at fault, just because somebody dies, does not justify charging anybody with vehicular manslaughter in my book.

So, if you or a loved one is being investigated, arrested, or charged with vehicular manslaughter, you've come to the right place.

You're dealing with an attorney now who's been doing this for 30 years, defending people for vehicular manslaughter cases. I've got a lot of not-guilty verdicts, and I've got a lot of non-filings by the District Attorney's office when they're presented with all the facts.

Often, we need to get experts, investigators, accident reconstruction experts, which I have on the payroll. We use them to show that this accident should not be charged criminally, it's just merely an accident, and it's unfair to blame somebody for a crime under the particular circumstances we're talking about.

Whether it's you or a loved one that has taken this first step — landed on my website — pick up the phone.  Make the call now.  Ask for a meeting with Ron Hedding. I stand at the ready to help you. Hedding Law Firm is a criminal defense law firm located in Los Angeles and offers a free case review by phone or contact form.