Use of a Weapon to Commit a Crime

For the last twenty-five years, I've handled weapons cases in the Van Nuys court and have had many successes with them. It is getting tougher and more challenging, though. As all these mass shootings occur, the prosecutors are getting a lot of political pressure to stop people from committing crimes with guns. So, if someone is firing a weapon, the prosecutors are looking to put them in prison as long as they possibly can. There are all kinds of legislative acts that have come into effect.

For example, if you use a gun in a robbery, it's a minimum ten-year sentence at 85%. The bottom line is that the police, the prosecutors, the judges, and the legislature will no longer let people get away with using guns in crimes. It gives them a massive advantage in the crime, and the public is outraged at all the shootings and deaths occurring by way of firearms.

So even if you have a gun case and didn't hurt anybody and never meant to hurt anybody, you can get swept up in this thirst for taking out people with gun cases. So, that's where your criminal defense attorney has to come in and come to your aid and show the prosecutors and judge that your case is not one of those cases that deserves the worse punishment.

You don't deserve to go to prison. You don't deserve a ten-year enhancement. You don't deserve to have a ban from ever owning, using, or possessing a gun for the rest of your life. These are the types of things at stake regarding these gun charges. So, the key is getting an attorney who understands the law, has dealt with many gun cases in the Van Nuys court, and knows how to deal with the prosecutors. Our Los Angeles criminal defense lawyers will review this topic in more detail below.

I can tell you that many prosecutors, believe it or not, are former law enforcement officers and do not like gun cases. They have the City Attorney's office, and the Van Nuys court has a special gun unit, so any case that involves a gun, these guys are on the case. They are stopping gun use in San Fernando Valley.

So, if you have one of these cases, you're going to either get with somebody like me who has been doing this for twenty-five years and deal with these gun prosecutors all the time. I recently had a case where a client pointed a fake gun at the police, thinking they weren't the police but somebody trying to rob him of his drugs. 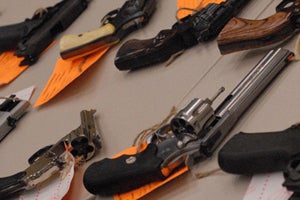 Now, I said to the prosecutor, you're only dealing with gun cases. This is a fake gun, but anything involving gun use, especially if it involves law enforcement, forget about it. These guys are all over it. They're on top of it. They're trying to put the person in prison, county jail, take away their gun rights, put them on probation – whatever they can do to stop people from owning, using, and possessing guns.

So, if you have a gun case, we first have to sit down and get our strategy together. Is it a case where we want to take it to trial? Is it a case that we need to resolve because, taking it to practice, you will lose and end up with a horrible sentence? So that's the first thing we need to determine. Then we have to figure out what our game plan is moving forward?

We need to show the judge and prosecutor that this gun or weapon case does not fall under the umbrella of protecting society. It's an aberration. It's one that they should give a break to and not bring down the total weight of the law on you, your life, your freedom, your criminal record. These are all things that you must be concerned about when you have a weapons case pending.

So, give me a call. We'll sit down and go over everything. We will come up with a game plan that makes sense. You'll leave my office thinking, okay, I understand what's going on. I know what I need to do on my end.

I see what my attorney is going to do to help me deal with this gun case, and then we put the wheels in motion, and we do everything we can to get you out of the criminal justice system as fast as possible on your way to leading an everyday life.