What is Criminal Trespassing?

Criminal Trespassing - California Penal Code 601 & 602 PC. The crime of trespassing is usually filed against a person when the authorities tell them not to go onto a location or a property. Then the same person is found on that property, and the owner now wants to press criminal charges against them. Also, someone can be arrested and charged with trespassing when found in a precise location they should not be in and is likely up to no good.

Trespassing is covered under California Penal Code 602, and aggravated trespassing is protected under California Penal Code 601. I often see this crime charged when neighbors have a dispute and the police tell one neighbor not to go near the other one's property, and low and behold, a problem occurs, the police are called out, and the person they told not to trespass has ignored them. They are then going to get arrested and charged with trespassing. 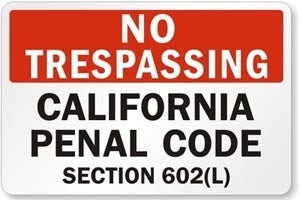 In most trespassing cases, the arrested person ignored posted signs that said no trespassing or went onto someone else's property under circumstances that they reasonably should have known that it would be a crime to do so.

I also see people arrested and charged who go into public locations like parks or other land owned by the state after hours, and the authorities cite them for the crime of trespassing because it was clear under the circumstances that it was not appropriate to be in the particular locations that they were found.

Another scenario that I see people having to plead to a trespassing case is when they are initially arrested for one crime (like stealing or domestic violence), and their attorney can negotiate the lesser charge of trespassing for them so they do not have to plead guilty to a more severe crime.

In other words, the prosecutors use it as a throwaway crime to say to the person we will give you a break and not make you take a more severe charge, but we want something on your record because what you did was wrong deserves consequences.

The case's particular facts determine this, and it will ultimately be argued to a jury if some resolution is not negotiated. Another defense to trespassing is for the defendant to say that they had permission from the owner or another to be on the particular property. This can be a complete defense to the crime of trespassing and will be evaluated by the surrounding circumstances of the specific case and, of course, by the use of common sense.

If the person arrested has no proof that they know the owner of the property, then it will be a tough row to prove that they are not guilty of trespassing.

What are the Penalties?

Typically the prosecutors will not seek jail time in these cases, and the judge will impose a fine. Sometimes it is possible to convince the judge to give the defendant a diversionary disposition. They can earn a dismissal after a certain period of remaining arrest-free and complying with the terms and conditions that the court imposes on them.

Further, the court will usually order the defendant to stay off the property they were found trespassing on for the probation period and will severely punish them if they disobey this order.

Other punishments can include community service, cal trans, and community labor. In these cases, the penalty will usually fit the crime. If the trespassing was blatant and the authorities suspect that the perpetrator was up to no good and targeted another more serious crime, they will try and lower the boom on them. If, on the other hand, the trespass was not that serious and the person has no criminal record, they will usually be given the benefit of the doubt when it comes to their punishment.