I was trying a big California Penal Code 243(d) PC battery, causing a serious bodily injury case where my client was an Uber driver who kicked passengers out of his car because they were trying to jam five passengers in a vehicle that could not have five passengers.

One of the passengers challenged him to a fight, stepped outside, and my client, in defending himself, punched the guy in the face, and that caused him to break his nose, fall, hurt his head and get a concussion.

My client was ultimately charged with a felony battery, causing great bodily injury, a brutal crime, a string if he were to be found guilty.  We had indicated that he was innocent the whole time, so we ended up preparing for trial. 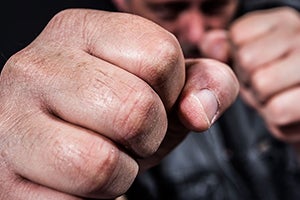 It's just one of those cases where the prosecutors don't look at their evidence clearly, don't realize they're going to lose the case because there's just such an enormous bureaucracy sometimes and just are looking at the injury involved to the alleged victim, not looking at what led to the injury.

There were some other surroundings they were trying to use against my client.  But the bottom line is this; once a deputy looked at it who was going to have tried the case against me, they realized they were going to lose, so they decided to go to their boss and say, I don't' want to try this case.  The guy's innocent. Our Los Angeles criminal defense attorneys will review further below.

We should dismiss it.  So, ultimately, they ended up dismissing the case right before the trial, which is a shame because the client has to spend all that money to prepare the case for trial, has to go through the anguish of months of investigating the matter and thinking that he could potentially get convicted of a strike.

If a felony battery or great bodily injury is alleged, it can be a strike on the person's record. So, it was an excellent result for him.  I was glad to get the dismissal, and to me, that's just as good as a not guilty verdict at trial because the DAs don't dismiss cases unless they genuinely realize they're going to lose the case.  In this case, the writing was on the wall, and they were going to lose it.

So, instead of letting the senior police officer get their hands on that videotape, the other attorney filed some stupid civil-type motion to get the establishment that had the tape to preserve it. Of course, they didn't, so that video evidence was lost, and I remember getting on the case and speaking to the investigating officer and saying why didn't you get that tape.  He said we didn't realize there was a tape over there.  Suppose we had known that we would have got it.  So, that was just a bad strategy by the other attorney.

I can help you.  Pick up the phone.  Make the call, and I will be there to do everything I can to get you out of the criminal justice system as fast as possible. Hedding Law Firm is a top-ranked criminal defense law firm in Los Angeles and offers a free case review by phone or fill out our contact form.