When somebody breaks into another person's house, law enforcement, prosecutors, and judges put this type of crime among the highest priority crimes for punishing, deterring, and ensuring that the offender convicted of this California burglary-type charge does not do so again.  So, one of their primary focuses when dealing with these burglary-related offenses is to make sure the offender never does it again.

As far as the difference between a person present burglary and burglary where nobody is home, one is a violent felony, and the other is a severe felony.  Both are striking.  You serve 80% of the time in one, and in the other, you save 85%.  The person-present burglary offense is the more serious one. When somebody breaks into another person's home, and there are people there at the house, this is a much more dangerous scenario where somebody could get shot and killed. 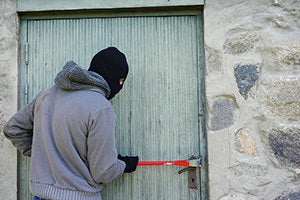 It's a much more scary scenario when somebody is coming into your home — your castle — and violating that space.  This is something that people never forget, and the legislature and the courts realize this. Hence, they make a person-present burglary a violent felony where the person will typically go to prison, serve 85% of the time, and have a strike on their record for the rest of their life in California.

Whereas the other scenario is also severe, where somebody breaks into another person's home and they're not there, that's still a residential burglary.  That's still a strike.  The person would typically still be looking at prison unless they can show some unusual circumstances.

I recently had a case where somebody broke into a mailroom. The prosecutors were trying to claim that it was a residential burglary at an apartment complex, which I think is a pretty weak argument, and that's probably one where we're going to be able to get rid of the burglary and also avoid prison time for the particular client because it doesn't have the same issues and problems of breaking into somebody's home, especially when they're present — or even when they're not present.

You're invading the sanctity of another individual's home, and that's where the legislature and court system has taken issue and really kind of laid down the gauntlet as far as what they're going to do to people commit those types of offenses.  So, you can expect that they will be angling to try and put a strike on your record, a felony conviction for the rest of your life and send you to prison.

So, this difference between a person-present burglary and one with no person present is also huge. If there's no person present, you don't have any criminal record — that's one where the prosecutors may consider not sending you to prison.  Whereas, the person-present, it's much more of a foregone conclusion that these guys are going to be seeking prison time, and you're likely going to have to convince the judge not to send the client to prison if they've got the goods and the evidence related to a burglary charge in Los Angeles County or in the San Fernando Valley for that matter.

I've handled these burglary charges for the past twenty-five years, and I know the factor area.  I know what's going to be considered when they're deciding whether a person goes to prison, whether they carry a strike on their record, and what the ramifications will be related to the burglary.

I've had some burglaries where people throw bricks through windows, and then somebody comes out, and they run away.  Obviously, this is something you don't want to do, but that's a far cry from sneaking into somebody's house in the middle of the night while they're home and taking things, and then there's some violent confrontation.

You have to look at both of those scenarios.  They're going to both be treated differently.  Both are serious, but this starts to give you an idea of which cases the prosecutors will demand prison. A strike and in which cases they may consider giving the offender a break — as long as they feel, and the court feels — that whatever they do to the person punishes them and is a deterrent for future burglary or future crimes.

One of the biggest things that the prosecutors are typically considered about — and judges as well — is that they give an offender a break on a burglary case, and that same person comes back to commit the same offense or something worse.  Now they feel like they had the opportunity to punish them seriously and didn't do it.

Those are the worse cases for judges and prosecutors.  When you evaluate criminal defenses cases — burglary charges, person-present, a person not present burglary charges — you should be considering the from the standpoint of the prosecutor and judge so you can see what their concerns are, and that's what we're typically doing. Then we address their concerns when we sit down to negotiate with them so that we can put the client in the best possible position—facing burglary charges? Contact our law firm to review your case.