Domestic Violence as a Felony or Misdemeanor

There are all sorts of nasty things that flow from a felony.  Plus, when somebody runs your criminal record, they'll see that you have a felony on your record.  That's a bad stigma that comes along with these sorts of offenses.

So, what people usually ask me is, how do we know whether it will be charged as a felony or a misdemeanor.  Usually, in domestic violence cases, people are being booked with like a $50,000.00 bail, so they think that they're going to be charged with a felony when a lot of times they probably won't be charged with a felony.  About 90% of arrests in Los Angeles County for domestic violence cases do not result in felony filings.

So, the question becomes, what does trigger a felony filing?  One example of felony filings is if you have a prior domestic violence case and now pick up a new one.  Domestic Violence Penal Code Section 273.5 is a wobbler, meaning it could be filed as a felony or misdemeanor.

It will be at the prosecutor's discretion whether they want to file it as a felony.  If you've got another domestic violence case and now you've picked up a new one, especially if it involved the same victim, there's a high probability it will be charged as a felony.  It doesn't have to be, but there's a high probability it will.

Another example of when you can expect a felony charge filed against you is when the victim has a severe injury or even significant bodily injury or some mayhem where they've got disfigurement. The prosecutor could allege a great bodily injury in a domestic violence case. 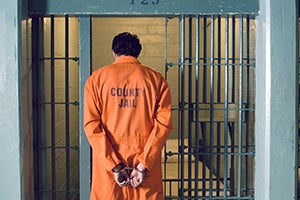 Then you could rest assured a felony will be charged against you.  To determine whether it's a serious enough injury, the types of injuries that you can expect to be serious enough for felony purposes would be any broken bones, scarring, lacerations requiring stitches, and disfigurement of the victim — any actual bad serious injury.

Sometimes I find myself arguing it out with the judge whether or not it's severe enough of an injury for it to be a felony charge.  Then you've got to get into the whole issue of serious injury versus significant bodily injury.

If the injury is bad enough, they can charge great bodily injury.  In that circumstance, you could be looking at an additional three years in prison, and the six years you're looking at high term for the domestic violence charge.  So, that's nine years right there.  That puts you in a bad position when the injury is bad enough to be considered great bodily injury versus serious injury.

The distinction between the two is really like splitting hairs. Often, you need an excellent criminal defense attorney to argue if they've changed a great bodily injury to try to get that enhancement struck because that also makes the case a strike.

Any crime in Los Angeles County under the three-strikes law where significant bodily injury is proved, the person has a strike on their record for the rest of their life.  It also means that any tie you serve, whether in county jail or prison, will be done at 85% because it has turned into a violent felony.

So, you do not want a felony at all costs.  If the injury is bad enough, you're in a challenging position. You want to get an attorney right away and let that attorney start working on your case to avoid some of the horrible ramifications of a felony domestic violence-related case.

If the case is charged as a misdemeanor, which most cases are, you're in a much stronger position to stay out of prison.  You can't go to jail for a misdemeanor related to a domestic violence-related offense.

The most time you could be given would be a year in the county jail.  Often, you could even avoid jail time in a domestic violence case if you have a good attorney and you have some of the good factors that you need to stay out of jail, like a job, no prior criminal record, no bad injuries to the victim.

Another area where I see people getting thrown in jail is when kids are involved — if you're battering a child or if your child is present when the domestic violence occurs, that tends to irk prosecutors and judges. You could probably expect they're going to want some jail time if you put yourself in the position where your children are watching you batter your significant other.

So, as you can see, many of these cases spin on the facts of whatever happened.  That's why it's so important to get somebody like me who's been doing this for twenty-five years because I've seen so many different variations — so many different situations. I know how to make the correct argument so that the prosecutors will look at the other side of the coin — the other side of you — so you could end up with the best result in your criminal case.