The minimum punishments are three years of probation, a 52-week domestic violence course where you have to do it once a week for 52-weeks and pay for the system. You also lose your ability to own, use or possess a gun or ammunition for ten years if you're convicted of a domestic violence charge.

And, of course, the court will put a protective order against you related to the other party you supposedly battered. That protective order could be a full stay-away, or it could be a level one protective order, which means that you can't annoy, molest, stalk, harass or strike the other person during the probationary period. You would violate probation and be subject to up to a year in custody if you do.  You would also be charged with a new offense. Our Los Angeles criminal defense lawyers will cover this topic below.

Possible Upgrade to a Felony Case

So, that's just the bare minimum.  Then they're going to look at other factors related to the case, like if the injury is nasty, they may want jail time in the case.  They may upgrade the case up to a felony. 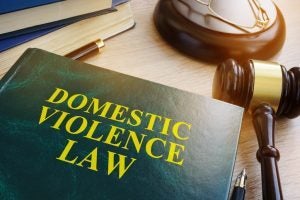 There are some consequences for a first-time domestic violence case.  But typically, what it's going to hinge on is precisely what happened in the case, how severe the injuries were, and what your prior criminal record looks like.

They'll even arrest the victim and bring them in and make them testify.  So, people call me and tell me the victim doesn't want to cooperate.  That doesn't help at all.  That happens in almost every single case.  The prosecutors know that.  They're aware of that, and they know what to do to get around that and get the testimony in any way.

Then you've got cases in first-time domestic violence matters where the victim wants to change their story.  The prosecutors will put them on the stand and have them change their level, and then they'll call the police officer in who took their original statement and look at the jury and say, of course, they're changing their story.

So, many things are going on in these first-time domestic violence cases.  Your best first step is to get an attorney who has handled these cases before.  I've taken hundreds of them.  Let me guide you through the criminal justice system, make the right moves for you to get the best possible result.