Seeking Lesser Charges Related to Domestic Violence. I notice that many criminal defendants when they're being charged with a California domestic violence case, and it looks like they're going to have to take a deal because the prosecutors have good evidence against them, they look for the best possible outcome.

For example, they admitted everything when the police came to their own; their spouse or significant other has said many bad things about them. There are photographs of the injury and independent witnesses who saw what happened — that's a difficult situation for the defendant.

Now that person will probably have to make a deal in the case.  So, what they're trying to figure out is, is there some lesser included charge they might be able to plead to so they don't get that Penal Code 273.5 PC – domestic violence conviction on their record.

There are lesser charges that relate to domestic violence.  There's a whole host of them.  The issue is whether or not the prosecutors are willing to consider these lesser included offenses in your case. 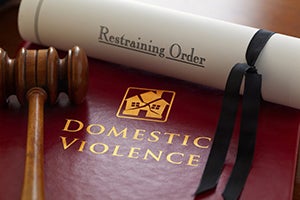 Again, depending on how good your attorney is in convincing them, what mitigating factors you might have related to your domestic violence case and what problems the prosecutors might have proved the case against you.  These are all things that will weigh into whether you might be able to get a lesser charge.

Examples of lesser included charges are simply battery – Penal Code Section 242.  A simple battery is what they call harmful or offensive touching.  So, you could push somebody, shove them, snatch something out of their hands — there's a whole host of different things that can happen when it comes to these simple battery cases.

But obviously, these simple battery cases are much better than having a stigma of a domestic violence conviction on your record when an employer looks at it, or somebody checks your record.  You'd rather have a simple battery that can be more easily explained than to be in a position where you're trying to explain a domestic violence-related charge.

Disturbing the Peace or Trespassing

Another example of a lesser included offense would be disturbing the peace or even trespassing — these two charges are much less severe than domestic violence or spousal abuse charge.  Disturbing the peace is just making a bunch of noise.

You can much more easily explain that to a potential employer or somebody looking at your background.  A trespass is someone going on somebody's property where you're not supposed to be.  There would be no stigma of domestic violence related to that particular charge.

So, these are two great lesser included charges.  They're not always easy to get.  You'll need a lot of sound mitigation in your favor like it's your first offense; nobody was hurt. In the case, the prosecutors might have some problems with the case, and then your attorney might have a chance of getting these lesser included offenses of trespassing or disturbing the peace.

Another slightly less serious charge would be Penal Code Section 243(e)(1), a domestic violence-related offense. Still, it doesn't have anything to do with any visible injuries, so it's slightly lesser than a 273.5, where there has to be a visible injury.

So, to get these lesser charges, your attorney will have to go to bat for you.  You will have to obtain a mitigation package with character letters and stuff about your work and history.

Stuff that makes you look like a good community member to sway the prosecutor to give you something less than one of those more severe offenses.  But as I've indicated in other articles and even in my book, even though you get this lesser charge — if your attorney can work it out for you — you still have some of the ramifications that flow from a domestic violence case.

For example, even if you got a disturbing the peace as a lesser charge, you would likely still have to do a 52-week domestic violence course.  That's what the prosecutors usually want.  You'd probably also lose your ability to own, use or possess a gun or weapon for ten years and ammunition.

You'd likely also be put on probation for some time.  So, just because your attorney can get a lesser charge, there are still specific requirements that the legislature has imposed on people who are initially arrested for a domestic violence-related offense that cannot be gotten out of even if you do get a lesser charge.

This is something you want to talk to your attorney about.  This domestic violence charge is a serious one.  It has serious ramifications, and to avoid those ramifications or lessen them, your attorney will have to be on guard to do everything possible to help you.