I had a case several years ago where my client was charged with California Penal Code 459 PC  residential burglary.  It was a pretty weak case against him, but the prosecutors had filed it anyway.  Whoever the burglar was had gone up to burglarize a house and was wearing some plastic or latex gloves to ensure that their fingerprints weren't left at the burglary scene.

They broke through the plane on the door, and there happened to be somebody home who yelled, so the burglar ran away.  In their haste, they through the gloves inside-out on the ground.  Inside the gloves was DNA.

Someone my client's DNA came upon the glove and some other people's DNA they could not identify, and they ended up filing the burglary under California Penal Code Section 459 against my client.

We did the preliminary hearing, and during the hearing, the only evidence the prosecutor had was that my client's DNA was on the glove and what we were able to do was find a case that said that DNA evidence alone is not enough. 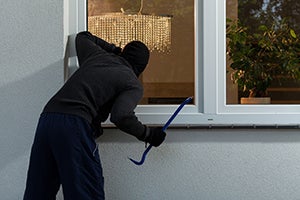 It has to be for the prosecution's case.  The fact that there's other DNA on the glove could mean somebody else committed the burglary. The judge realized that I was right and dismissed the residential burglary charges.  My client walked out.  They never filed that case again.  They had no other evidence to be able to find. Our Los Angeles criminal defense lawyers will review this topic further below.

Review of All the Burglary Evidence

So, you have to look at everything, especially when you get a case like that where you're scratching your head and saying that doesn't seem right, that just because somebody's DNA is inside a glove that was thrown on the ground doesn't mean that they were the burglar.

Don't you need some other evidence — like maybe you find some stolen property on them, an eye witness puts them at the scene — some evidence — they're seen with a bunch of latex gloves. Whatever the case may be, you can't just get somebody because their DNA happens to be on a glove in that type of scenario.  There are a lot of cases like that where it just doesn't make any sense.

You have to realize the prosecutors can file these cases, and they can try to go after them, but you need a great criminal defense attorney to fight back because if you don't fight back, they're going to go for that conviction and say why that person's DNA on that glove is?

What other explanation is there?  Whatever excuse is there?  Did he testify and explain why the DNA wasn't on there.  The bottom line is you don't have to testify.  You don't have to explain anything because it's the prosecution's burden to prove every case beyond a reasonable doubt, and if they can't do it, then it's a not guilty verdict period.  Plain and simply.

So, I always learn from doing criminal defense for the last 26 years that if something seems wrong, it usually is, and it's my job to figure it out, to find the case law, to find the angle to get the dismissal if that's the right thing to do. Hedding Law Firm offers a free case review by phone, or you can fill out our contact form.