I represented a client I liked a lot because he was a good guy, and he was charged with a road rage-related offense based on an issue he had on a freeway with another driver.  The considerable dispute in the case was these guys ended up crashing into each other while they were mad at each other.

One of these situations is where somebody is going too slow, a guy starts tailgating, and somebody goes around one guy, then some brakes are slammed, and suddenly there's an accident. Of course, both drivers are blaming the accident each other. California Vehicle Code 13210 describes some road rage penalties, and our Los Angeles criminal defense lawyers will discuss them below.

For whatever reason, the police decided to take the case to the prosecutors against my client, and he was charged with road range offenses the guy had a spotless record, was professional, and didn't want any criminal record. Most of the time, if you do something that could potentially hurt somebody on the road because you're angry, they can charge you with assault with a deadly weapon they can come up with battery and all sorts of different charges.

Then they make the accident your fault, and now you have to pay for the person's car — all sorts of issues.  If it's a situation where you're claiming that the accident was the other person's fault, then your insurance company is not going to cover it, but now you're charged with a criminal case.

So, these road rage-related cases are severe in Los Angeles county, and you want to get an attorney who knows how to deal with them.  Sometimes you're in a situation where you didn't do anything wrong, and the other person was the one that was angry and acting crazy and driving like a nut. 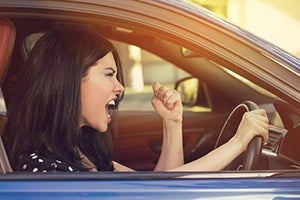 Other times it's the other way around, and you're the one that's responsible.  So, that's probably the first thing we have to identify realistically, and that is what position we are going to take.  In other words, what are we going to argue?

Are we going to try to claim that you're innocent, or is it a different situation where we will have to accept responsibility because they have the evidence?  Maybe they have a video or a witness or two. We have to evaluate, number one, our position going to be because that pretty much drives our road map in a road rage case to decide how we're going to handle it.

You can be tricky and aggressive with the prosecutors if you're not going to make a deal under any circumstances.  Then, I say, who cares what they say because you're not making a deal.  You're going to try to have a jury find you innocent.

So, if the prosecutors get mad at you, it really doesn't matter because they don't get to sentence you if you get convicted, only the judge does, and at that point, they're in control of the charges, but so what?  If they can't win the charges, then it becomes irrelevant.

Suppose, on the other hand, you're going to have to try to work a deal out with the prosecutors in a road rage case in Los Angeles. In that case, you'd better be nice to them, because if you're not, then they're going to be in a position where they're going to be angry with you, and they'll take it out on the client, so you don't want to do that.

So, if you or a loved one or anyone you know has a road rage case and is charged with assault with a deadly weapon, road rage-related offenses, battery, being blamed for a car accident. You need help — whether it's their fault or the other person's fault, or maybe it's a multi-vehicle accident, pick up the phone.

I've been doing it for 26 years.  I worked for the DA's office.  I worked for a Superior Court judge in Los Angeles, and then in 1994, I opened up my criminal defense practice and have been doing that ever since. Hedding Law Firm is Located in LA County and offers a free case review by phone or fill out our contact form.

Related:
How to Beat a Road Rage Charge