Use of Excessive Force by a Police Officer

Excessive force is an interesting concept because I use it in criminal defense as a defense to certain crimes that my client is charged with.  For example, California Penal Code 148(a)(1) resisting arrest and battery on a police officer (CALCRIM 945).

Some of these other charges that the police drum-up once they rough somebody up and the person either fights back, or they don't fight back, the police are just putting a crime in there to justify arresting them, putting them in custody, and to try to counter any civil claim the person might have against the police.

So, the CALCRIM 2656 jury instruction that would be given has to do with saying you're being charged with resisting arrest.  The officer has to be in the performance of their duties at the time.  So, they can't just attack somebody or use unreasonable force and then claim that you're resisting arrest.

So, the jury instruction, which is the law that would apply at a jury trial, is that a police officer is not permitted to use unreasonable or excessive force in making or attempting to make an otherwise lawful arrest in detaining or attempting to detain a person for questioning. 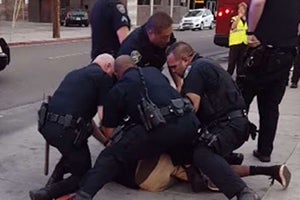 If an officer does use unreasonable or excessive force in making or attempting to arrest, detaining, or trying to detain a person for questioning, the person being arrested or detained may lawfully use reasonable force to protect themselves.

Thus, if you find that the officer used unreasonable or excessive force in making or attempting to arrest in question and if the defendant used only reasonable force to protect themselves, the defendant is not guilty of whatever crimes they're being charged with.

So, this is telling you that the police can't attack people and rough them up, and then when the person tries to defend themselves from being attacked, the police are going to charge them with a crime related to that.

It's difficult to prove these cases a lot of the time; however, now, with all the new video evidence available to people, it is possible to argue that the police used unreasonable force. You could also use witnesses that saw what happened if you weren't doing anything, and the police just came up and attacked you and threw you down, and all you were doing was defending yourself.

Right to Self-Defense or Defense of Others

Another CALCRIM 3470 jury instruction given with these cases when you're trying to defend them when the police have acted unreasonably is self-defense.

Somebody attacks you, even a police officer. You can argue that you're just simply trying to defend yourself. Therefore, you shouldn't be able to be charged with any particular crimes. Otherwise, that would be unreasonable and unlawful.

So, if you find yourself being charged with a crime, you don't feel you did anything wrong. The best way to handle it is to get an attorney.  Let the attorney evaluate all the facts and circumstances and make the best move to defend you moving forward with your criminal case.

All of this, though, is going to center on a couple of big things:

So, pick up the phone.  Make the call.  We'll talk about the whole situation and see what your best approach is moving forward in your criminal case, so you get the best result. Hedding Law Firm is based in Los Angeles County and offers a free case review by phone or use the contact form.