Why An Employee Who Embezzles Is Treated Harshly

California Penal Code 503 PC embezzlement involves somebody who sits in a position of trust in a business or a company or even a little mom-and-pop store. They use that position of faith to be able to take some merchandise, cash, or whatever is of value related to that business, store, or a mom-and-pop shop.

The reason that embezzlement is treated more harshly than a theft-related offense that would be carried out by a customer or somebody who is posing as a customer is that people who sit in positions of trust should be able to be trusted and are given a lot more access to information, property, and goods.  We don't want those people to abuse that position of power that they're placed in. 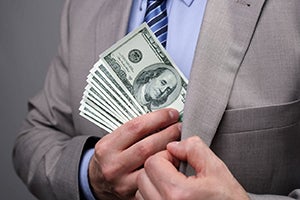 We want people to be able to trust their employees and those who they work with, and therefore, the prosecutors and judges in these embezzlement cases are going to be much harsher on somebody who sits in a position of trust as an employee than somebody who doesn't know anybody and is taking something.

Both situations are wrong, but the person who is embezzling money will be dealt with differently in my experience in Los Angeles County criminal courts and the San Fernando Valley because of that position of trust that they sit in.  Now, there are ways to turn the tide when it comes to these embezzlement cases — or even grand theft cases — in the various courthouses, and that is to be able to pay back whatever money or property is taken.

People need to realize that no matter how you slice it, they will be ordered to pay it back if they get convicted of embezzling money from their employer. It doesn't matter if they don't have any money or not. Still, suppose you could get the money or have the money and pay it back. When it comes time to resolve the case, the prosecutors and judges will be much more accepting of your reasoning behind why you did what you did than if you just spent all the money and have no money.

The reason for that is, number one, you're making good on something that you did wrong, and number two, and probably more important to the prosecutor and judge in a criminal case, is that you're making the victim whole.  In other words, you're getting them back to where they were before the money was taken.  This is one of the primary jobs of the prosecutor and judge in a criminal case.  So, if you could help them do that job, you will be rewarded for it.

You, Will, Be Ordered To Pay Back Money

If you simply take money, never intending to pay it back, get caught, get convicted, and can't pay it back, you're still going to be ordered to pay it back. But, instead of getting a more lenient sentence in your case, you're going to be looking at jail or prison time as your punishment because these are the harshest punishments that the prosecutors in a criminal case can let out.

Therefore, if you're not giving them what they want and you're living a victim in an embezzlement case fast money or goods and they have to suffer because of it — because you were in a position of trust and took advantage of that, then obviously the prosecutors and judges are going to bear that in mind and punish you accordingly.

So, when it comes to an embezzlement case versus a theft crime case, both are bad, both are treated harshly, but as you can see from the various propositions that have been passed throughout the State of California, they've taken a big emphasis off theft and more on violent crimes as far as putting people in prison or putting people in jail.  So, there are a lot of different available programs.

On the flip side, the prosecutors and judges are still very tough on embezzlement cases because of that position of trust that the person sat in and because they feel like these offenses are much more severe than a general theft-related offense. So, if you've got an embezzlement case in LA County, pick up the phone.  Make the call.  Let's sit down.

Let's figure out the best strategy based on the facts and circumstances surrounding your case so we can do damage control and get you the best result. We specialize in defending clients in all Los Angeles County Courthouses, including Van Nuys Superior Court and the Burbank Courthouse.