Consequences of a Carjacking Conviction

A “Strike” Under California's Three Strikes Law. Carjacking is a very similar crime to robbery.  A carjacking is a robbery. Carjacking is defined under California Penal Code 215 PC. I think the legislature just got more specific in these cases because people were explicitly, and still are, targeting high-dollar cars to take away from people by either force, fear, or a weapon or threat.

So, the legislature has gotten real specific about calling it a carjacking versus a robbery, even though it meets all of the elements of theft.  It also has a lot of the same consequences as a robbery. It's a strike under the Three Strikes Law.  It's a violent felony, so you have to serve 85% of any time that the judge gives you, and obviously, it's something you don't want on your record if you could avoid it.

So, you want to try, at least from a defense standpoint, to take it out of the gamut of the classic carjacking case where the person has targeted a specific high-dollar car and is trying to take it away from the other individual by force or fear.

I see many carjackings, not necessarily for the car, but the person is just trying to take the vehicle to use the car.  In that circumstance, you might have a good argument to try to avoid a carjacking conviction.

If you can avoid it,  you don't want that on your record; you would rather have something like a grand theft person or some other theft-related offense that doesn't have that negative connotation and isn't likely to land you in prison for an extended period.

So, if you or a loved one has a carjacking, expect that the prosecutors will want prison time.  They're going to want a strike on your record, and if you're going to try to avoid that, your best chance is to have an attorney fighting with you who has handled these types of cases before.

One who has had success knows what it takes to try to either defend the case, if there is a defense to the carjacking, or if there's not a defense, to try to mitigate it down to try to avoid some of the dire consequences like prison time and like a strike on your record for the rest of our life and a whole host of other potentially harmful effects when it comes to these carjacking cases.

It uses force or fear to take somebody's car away from them.  Sometimes people will come up with a gun, point it at the person, tell them to get out of their car and take it away. 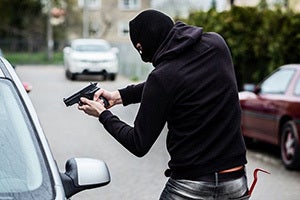 Other times, I've seen a knife used.  I've seen them catch somebody by surprise, pull them out of the car, and violently hit and beat them and take their vehicle away.

When you evaluate these carjacking cases, you want to assess them for what the person's target was. How valuable the car was, whether there was any damage to it, does the defendant has a criminal record, have they ever done something like this before? These are all considerations when the prosecutors and judges decide what to do with these cases.

Another thing you want to look at is, do you have a defense?  Maybe there's an identification problem.  The person can't identify who the carjacker was, and the police somehow have some thin evidence pointing to your guilt.

They've got you caught in the car, other times, driving away with the vehicle.  The police pull you over, and the person can identify you as the carjacker. That would be a case where you're not likely to be able to defend the case.

You're going to have to work out a negotiated plea by using a good criminal defense attorney who can bring out all of the mitigating factors about you, your life, your family, your work, and you as a person to try to avoid some of those dire consequences that come along with these type of cases.

When I evaluate a carjacking case, the first thing is I get the family in or the person in trouble, and I go over their whole story with them, and when I do that, I encourage them to tell me the truth about what happened.

So, I'm not under any false misconceptions, so I can adequately represent the person.  After I go through their whole story, we talk about whether there are any potential defenses. Lastly, we will talk about damage control mitigation that we can do with the prosecutors that will make a difference.

For example, we can get some character letters about you.  We could get a letter from your job.  The job doesn't necessarily have to know that you're charged with carjacking, but they could just be giving a letter talking about your good character, that you're a hard worker. Because again, we're trying to take you outside the gamut of being a bad criminal carjacker to being somebody who is a productive member of society who just simply made a mistake.

Related Content: What Are the Best Defenses for Carjacking Charges?